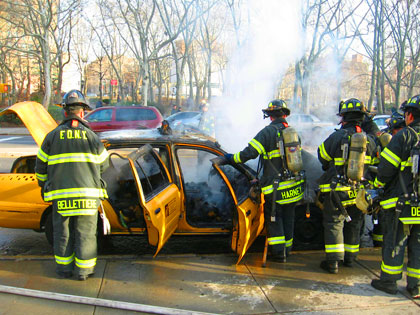 Coincidentally at the scene as well was the Brooklyn Eagle’s Mary Frost who reports:

Brooklyn Eagle: The taxi’s driver, Mr. Alvi, told the Brooklyn Eagle that he was driving two passengers, a man and a woman, over the Brooklyn Bridge when he noticed smoke coming from the hood. “It was just a little smoke,” he said. “I pulled over and told the passengers to get out. When I opened the hood, I saw it was on fire so I called 911.” The fire quickly engulfed the cab, a Ford Crown Victoria.