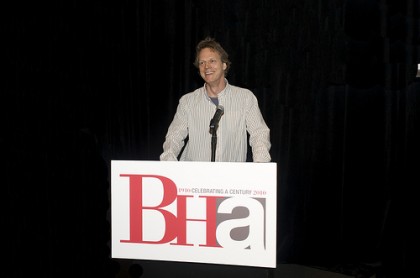 Multi-talented Peter Hedges–novelist, screenwriter, actor, director, and Oscar nominee–lives in Boerum Hill but works from his studio on Montague Street. Yesterday evening he was master of ceremonies for the opening event of the Brooklyn Heights Association’s year long centennial festivities, “Hollywood in the Heights”, a video presentation and panel discussion about movie-making in our neighborhood. The event was held before a capacity crowd at St. Francis College auditorium, and began with brief introductory remarks by BHA President Tom van den Bout and Borough President Marty Markowitz. 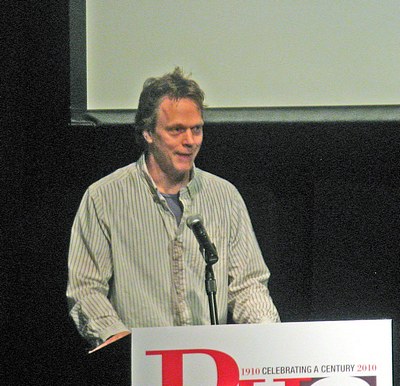 Mr. Hedges then began by screening a film collage of scenes from movies shot in the Heights, among them The Age of Innocence, Burn After Reading, Moonstruck, Prizzi’s Honor, The Sentinel, and Without a Trace. Afterward, he introduced two panelists: line producer Mari-Jo Winkler and location manager Kip Myers. They discussed the reasons filming in the Heights is so popular: primarily because of the neighborhood’s aesthetic quality, a result of its being a landmarked district, but also because of New York City’s helpful attitude towards the industry and its proximity to the homes of many film executives and professionals (asked why scenes from Burn After Reading, with a story set in Washington, D.C., were filmed in the Heights, Mr. Myers, who served as the film’s assistant location manager, noted that the Coen brothers, who produced and directed the film, live in New York).

During the question and answer session, Judy Stanton, BHA’s Executive Director, asked if production companies typically made contributions to civic associations in the communities in which they do filming. Ms. Winkler replied that they normally budgeted to contribute something to the neighborhood. Asked why so many trucks were needed to be brought into the neighborhood for even a brief shoot, Ms. Winkler said that filming requires an enormous amount of equipment, costumes and props, as well as food for actors and crew, and that trailers had to be provided, under the Screen Actors’ Guild rules, for actors to change and rest. She added, however, that the industry is very sensitive to “green” concerns, as well as to community anxiety about loss of parking space, and therefore is trying to minimize the number of vehicles and trailers used. Some actors, she added, have responded to these concerns by being willing to share trailer space.

Future events in the BHA’s centennial celebration are listed here; we’ll keep you updated as they approach.