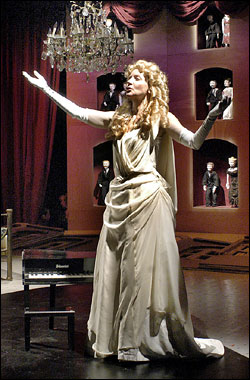 The Scotsman: Living Dolls: As time is called on the interview, Breuer extends an invitation to go to see the view from the roof garden of the apartment he shares with Mitchell in New York's Brooklyn Heights. They go there to do yoga when time allows, and it was here they saw the Twin Towers fall on the morning of 9/11. He does, he admits, live an extraordinary life.

Walking through the quiet residential streets towards his home, he talks non-stop and with verve about his forthcoming projects, which include a commission from Brisbane Festival to work with Chappa, his musician son from the second woman in his life, Polina Klimovitskaya, the inspiration for Breuer's free-flying ballet and 2005 hit Red Beads.

And then, of course, there is his newest work about JC, planned for next year, in which he intends to re-imagine the crucifixion with Bob Marley as the Christ figure.

The long walk to the top of his apartment block is worth it. The view is, as he promised, extraordinary.