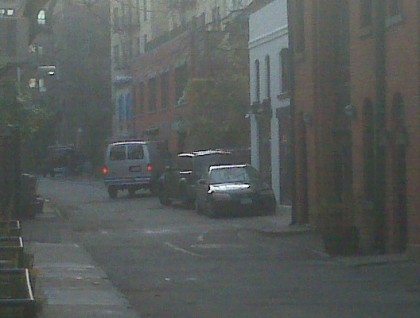 After posting earlier this week about Sunday parishioners blocking the bike lane on Henry Street, we received this parking related dispatch from an anonymous tipster on Hunts Lane: 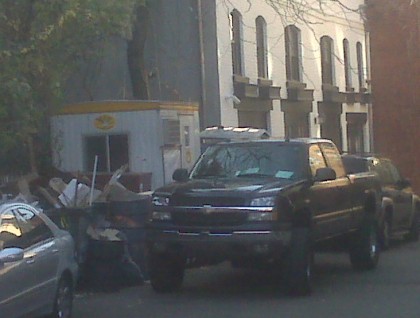 While parking, or lack thereof, is a problem in all of Brooklyn Heights, Hunts Lane is especially troublesome. You see, Hunts Lane is a posted No Parking Anytime street.

However, people (illegally) park here all the time.

There is, for example, constuction occuring on the block and workman park (illegally) their personal vehicles all day in front of the home they are working on. Before that, they parked their vans and trucks in the same location. Repeated calls to 311 and the 84th Precinct yielded nothing – perhaps a ticket now and then, but the vehicles returned each and every day. The uneven enforcement is not serving as a deterrent. This has been occuring since April, at least.

More upsetting – and its upsetting because repeated attempts at speaking to the 84th Precinct Commander have gone unanswered – is the Lebonese Church at Henry and Remsen. Parishoners park along the bike lane, on curbs, and even on my street – the Posted No Parking Anytime lane – each and every Sunday for hours at a time. The Police do not enforce the posted signage here. Unfortunately, I don’t have video like the other post, but will attempt to

Yassky’s office was unhelpful to say the least. The told a neighbor of mine the Mayor’s office is pro-business and has told NYPD not to ticket. My neighbor recently reached out to Councilman-Elect Levin seeking assistance and is awaiting reply.

Go down Hunts today. Take a look around. See for yourself.

Bottom line: we need relief from this situation. Cars and vehicles can not illegally park repeatedly and face zero consequences.
Allowing them to continue as is provides no disincentive for them to repeat the act. This should fall into the “Applications of Broken Windows Theory 101.”