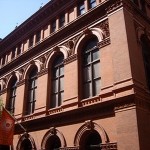 This Friday, December 4, from 7 to 9 p.m., the Brooklyn Film and Arts Festival, in conjunction with the Brooklyn Historical Society, will present a Brooklyn-themed documentary film festival, Brooklyn Back in the Day. The festival will be held at BHS, located at 128 Pierrepont Street (corner of Clinton).

The films in Brooklyn Back in the Day depict the transformations and challenges faced by Brooklyn residents in the late 1960s and early 1970’s. This screening has been curated by Aziz Rahman, director of the Brooklyn Film & Arts Festival and will feature special guest speaker Professor Joe Dorinson, Long Island University.

The films include: “The Boys of 2nd Street Park”, “The Cities; Dilemma in Black and White,” “The Romeows” and the short vintage films “Brooklyn Vintage Trolleys on the Streets of Brooklyn”, “Heel and Toe Artists Hoof it to Coney Island” and “War on the Roof”.

Admission is a suggested donation of $5.00.

11201, Brooklyn Back in the Day, Brooklyn Film and Arts Festival, Brooklyn Historical Society