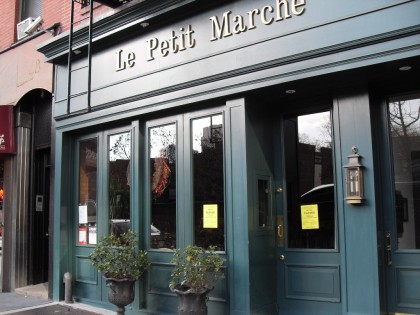 Le Petit Marche [46 Henry Street], as previously reported today, was closed by the Department of Health following it’s third subpar inspection since August, officials tell Brooklyn Heights Blog.  A look at the DOH website shows that the restaurant received 37 violation points in August and 44 in October. While the most recent inspection on the site was last week’s 23 violation points, the DOH still shut down the restaurant until the it files to have a re-inspection. DOH statement after the jump.

The Health Department closed Le Petit Marche on 11/19/09 after it accumulated 28 or more violation points on three inspections since August. They were found operating with washing equipment that is insufficient for sanitizing table and kitchenware, and for having shellfish without necessary tags and identification. Other factors that contributed to the closing include the restaurant was operating without a Food Protection Course certificate holder present.

In order to reopen, the operator of Le Petit Marche must correct all conditions that led to violations, submit an affidavit of correction to the Health Department and schedule a re-opening inspection.