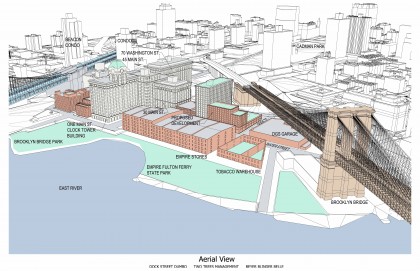 Newly released documents reveal that Department of Education architects felt that Two Trees’ controversial Dock Street DUMBO project “would yield a very small school (compromised from our standards) with premium costs due to the mixed use with the high-rise residential building.”

However, the two-year-old internal e-mails do not address the current plans for the site, according to the School Construction Authority.

The figures were found in e-mails obtained and released by Councilmember David Yassky, under the Freedom of Information Act.

The new information, however, doesn’t take into account recent modifications and the ongoing design process for the project,  said William Havemann, Department of Education spokesman.

“I think that it’s important to note that there are challenges presented in any potential school site across the city,” he said. “The emails that [Yassky] has released acknowledge those challenges in the Dock Street site.” He maintained that it would have been “fiscally irresponsible” of the city to have passed up receiving the land, core and shell of the building from the developer at no cost.
Share this Story:

Nabe Blogger Chuck Taylor Gives Big Thumbs Up to New Armando’s
The Lobster Sign is Back at Armando’s!