2009 will be a summer I remember for turning corners, metaphorically as well as literally.

In the dog-walking business, corners are places loaded with anticipation and dread. Daisy looks up to ask if we’re turning east up Clark Street, toward what I think of as Pizza Place for the food tossed in the gutters, while Pickering and Hermia look west, to Cranberry (i.e., Squirrel Street) and Hillside Park. The concrete building corners and iron fences are redolent with scents, making any corner an adventure in history, but they are also blind spots for who or what is coming our way. I often wish I had a periscope and rearview mirror when I’m out with more than one dog so I’d know if Bangor’s Akita enemy was about to intersect us or what the jingle – keys or tags – is that’s creeping up on us.

This is also the summer that my family has had to bow to the toll of old age. I missed more than three weeks of walks because I was in Arizona trying to help my blind father cope while my mother was in the hospital and nursing home. I learned a lot in those visits to the nursing home and one thing is how important it is to have earnestly living lives around people who are losing their bodies and their minds. Two dogs live there and while they aren’t therapy dogs – they aren’t there to offer succor – they make people’s days when they stop for a pat. One of them howls whenever a newcomer arrives, a warning to everyone that someone new is on the scene. When being with my mother became too painful, I sought out Cassie and Freckles, with whom I’d immediately taken steps to make friends. Cassie and I played I-dare-you and Freckles simply dropped to her back for a belly rub. Mother was enormously cheered by them but I’m not sure I could have been as cheering to my mother as I managed without the dogs to turn to.

I came back to Brooklyn in a state of exhaustion, grief, worry and confusion about my mother’s failing health and cognition and there came a moment when I broke down in ragged tears. Daisy sat down to watch and worry, but Pickering, my shaggy pony of an English Lab, climbed up next to me on his couch, stretched out and put his head in my lap. 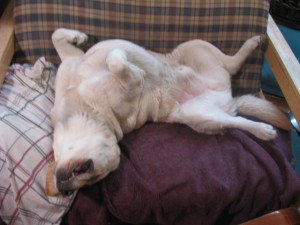 Pick is always ready to be loved: he squirms for it, bouncing from one vantage contact to another in relentless pleasure. But whereas Daisy wants to know I’m OK so that she’s reassured that she’s OK.

On Thursday I turn another corner: Pickering is moving to Bronxville. He’s going to join a dog-hiking club and will be closer to his family’s farm so I know he’ll thrive. There are going to be some days to come, however, that not having him for five days a week will be an out-and-out loss. He’s the only dog I’m not scared of turning corners with and the best dog I know to have around when I’m taking my own 90-degree turn into a grim unknown