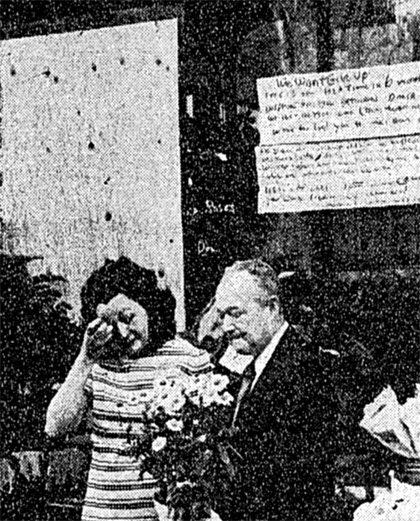 At that time, Atkins was in the middle of intertwined controversies.

The first involved attacks upon his James Weir Florist Shop at 160 Montague Street.   The newspaper reported that its huge store front window had been attacked four times by “brickbat, two crude pipebomb explosions and a spatter of six air gun shots.”

Atkins used his shop window to post “editorials” written with magic marker on large pieces of paper and taped to the glass.  Many were political attacks against President Nixon, the Vietnam War and J. Edgar Hoover.

However, Atkins believed his advocacy of a “black dentist’s” attempt to purchase 152 Montague Street and his blaming racism for the deal  falling through was the motive for the attack.   After the incident,  he chose to write an editorial about the situation for the first time.   Headlined “We Won’t Give Up”, the piece told neighbors that he was helping the man purchase the building to “prevent further loss of freedom in this country.”

Others in Brooklyn Heights disagreed with Atkins’ claim, suggesting that his true motives were to earn a $6,800  commission on the sale (he was the real estate agent) as well as consummating a side deal he made with the current owner to buy his competing floral business, also at 152 Montague.

Aside from storefront editorials, Atkins  and his wife Charlotte were part of a neighborhood circle of friends who provided shelter and food for homeless man John Sigurd Nelson aka “The Viking”.  For several months before his death in 1989 the Atkins’ allowed Nelson to sleep in the basement of the flower shop.  According to his New York Times obituary, Nelson was well known in the Heights for his “public orations on the news of the day and politics, his admiration for Princess Diana and his passion for buttermilk.”

Did you know the Atkins? The Viking? Have any more information? Let us know in the comments below.