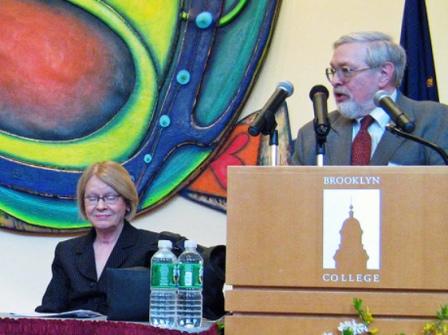 A group of distinguished civic leaders and academics, including former journalist and Phoenix founder Michael Armstrong and former Deputy Mayor, now Crain's New York Business publisher, Alair Townsend (photo above), convened at the Brooklyn College Library on Thursday to discuss the events, forces and people behind the residential, educational, commercial and artistic resurgence of Brooklyn.

The proceedings began with brief introductory remarks by Mr. Armstrong, followed by several others, including former Borough President Howard Golden, who was honored at the opening reception held on April 16th at the Brooklyn Historical Society.  The keynote speaker was Professor John Mollenkopf, Director of the Center for Urban Research at CUNY Graduate Center, whose topic was "Modern Brooklyn in Context."  Professor Mollenkopf began by noting the similarity of Brooklyn's problems in the latter decades of the twentieth century to those of "rust belt" cities like Cleveland and Detroit: reliance on declining manufacturing industries, stresses caused by changing ethnic demographics, and crumbling infrastructure.  He noted, however, that Brooklyn benefitted from its proximity to the relatively vibrant Manhattan economy, its large stock of mostly well-preserved housing, and the energy imparted by the arrival of immigrants.  As a result, Brooklyn proved to be resilient.  Looking to the future, Mollenkopf noted that Brooklyn's "native" population is aging, and will need to "build bridges to younger immigrant populations."  He said that a critical issue for the Borough's future is how well the second generations of these immigrant groups fare in education and careers.  Finally, he noted that the problem of lower and middle income people being priced out of the housing market would have to be addressed.

The first panel discussion was on the topic of "Neighborhood Revival in Brooklyn", and was moderated by Ron Shiffman, former Executive director of the Pratt Institute Center for Community and Economic Development.   In his opening remarks, Mr. Shiffman said that Brooklyn Heights in the 1950s and 60s was a pioneer "activist community", noting in particular the work of Nancy and Otis Pearsall in motivating and organizing the struggle that led to the Heights' being designated New York's first historic district.  The next speaker was Colvin Grannum, President of the Bedford Stuyvesant Restoration Corporation, which owns and manages a commercial and cultural center in the heart of Bed-Stuy, and sponsors community educational and housing development programs.  Mr. Grannum said "what Brooklyn is about" is a mixed-income community, and that "serious intentionality" is needed to make sure it stays that way, and to produce "win-win solutions" to future challenges.  Tupper Thomas, President of the Prospect Park Alliance, noted the Park's role in "bringing people together."  The last speaker on this panel was Luis Garden Acosta, President of El Puente Academy.  He recalled that his mother, who came from Puerto Rico, had lived in the section of the Heights that was demolished for the Cadman Plaza development, and that he grew up in the Fort Greene projects, which at the time were a reasonably livable, "ethnically mixed" community, but which later became "ground zero of gang warfare."  He decried what he sees as "class cleansing" and "top-down autocracy" in present-day development in Brooklyn, and what he called the Bloomberg administration's lack of belief in the "primacy of community."

The topic for the second panel, moderated by Brooklyn College Professor Robert Viscusi, was "Image and Perception: The Changing View of Brooklyn".  The first speaker was Steve Hindy, co-founder and President of Brooklyn Brewery.  Mr. Hindy said he decided to get into brewing because his wife tired of his work as a war correspondent, and he had become adept at home brewing while stationed in the Middle East.  Because of his journalistic background, he first intended to call his brew "Brooklyn Eagle Beer", and envisioned a label that included both an eagle and the Brooklyn Bridge.  Seeking advice on this, he contacted the famous graphic designer Milton Glaser, who suggested that he simply call the beer "Brooklyn" (Glaser reminded Hindy that another brewer already used an eagle as part of its label), and that, to evoke this image, all he needed was a very simple design.  This led to the now widely recognized "B" in a circle logo.  (Speaking with Hindy after the event, I secured his promise that there would never be a "Brooklyn Light".)

Hindy was followed by Brooklyn College Sociology Professor Sharon Zukin, who noted that Brooklyn is now "cool"; former Borough Historian John Manbeck, who focused on the negative stereotypes about Brooklyn that developed in the 1930s, fueled, in part, he said, by writers like Thomas Wolfe who parodied the "Brooklyn accent"; and BAM Executive Producer Joseph Melillo, who said that BAM and Brooklyn are now "understood by the global art marketplace" and that it is now "time for artists and developers to partner."  In the question and answer session that followed, a woman in the audience challenged Professor Zukin's focus on the mostly white Williamsburg hipster scene as evidence of Brooklyn's coolness, noting that the Borough has long been home to substantial African-American communities that have their own way of being "cool".

Ms. Townsend moderated the final panel, which discussed "Re-Making of Brooklyn: Major Projects and Initiatives."  She began by describing her efforts as Deputy Mayor to get a major tenant for Pierrepont Plaza.  The City hired a relocation consultant, who determined that New Jersey had an enormous cost advantage over Brooklyn.  Consequently, it was necessary to put together an incentive package of tax breaks and other benefits.  Townsend said it was worthwhile for the City to forego some tax revenue in order to preserve its tax base over the long run, and also noted that getting financial companies to locate their back office operations in densely populated places like Brooklyn that are served by mass transit is good for both the communities, which benefit from jobs, and the environment.  This was seconded by Hardy Adasko, Senior Vice President of the New York City Economic Development Corporation, who noted the advantages of close-in development over "spread city".  Harvey Shultz, a former aide to Borough President Golden and now Senior Vice President of Muss Development Company, said "big projects take a long time."  He described the conundrum that faces them: when the economy is poor, communities may welcome new development, but developers and lenders are reluctant to proceed; when the economy is strong, developers are eager to build, but communities are likely to oppose major projects on quality-of-life grounds, such as projected increases in traffic.

The last two speakers were Paul Travis, Managing Partner of Washington Square Partners, a real estate development advisor, and Michael Weiss, Director of the Metro Tech Business Improvement District.  Mr. Travis described the difficult process of getting Chase Bank (now JP Morgan Chase) to move back office operations to Metro Tech.  He said this succeeded mainly because top management of the Bank became convinced that Brooklyn's leadership "would get things done."  Other contributing factors were the availability of a high quality labor force and amenities such as parks and cultural institutions.  Mr. Weiss focused his remarks on the importance of immigrants, whether from other parts of the City, the country or overseas, to the future development of Brooklyn.  Among these immigrants, he mentioned in particular artists, "alternative lifestyle" adherents, and "empty nesters".

The conclusion of the "Roots" series will be "Neighborhood Day in Brooklyn", an all day event at Borough Hall on Saturday, May 12.  This will feature, along with the "Roots" exhibit and more panel discussions, an oral history studio, open from 10:00 a.m. until 3:00 p.m., in which you may tell your own story about your neighborhood in Brooklyn during the 1970s and 80s, and a live cable/webcast from 3:00 to 5:00 p.m. led by famed journalist, author and Brooklyn native Pete Hamill.