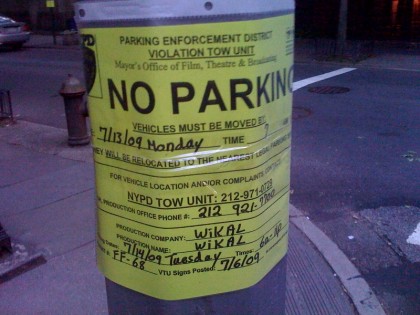 Looks like pouty vampire heartthrob / Twilight star Robert Pattinson is headed to Brooklyn Heights.   In-between sequels to the bloodsucker blockbuster, he’s shooting a flick  called Remember Me, which is being called “this generation’s Love Story“. A BHB tipster writes to us via Facebook:

I saw signs on Hicks between Middagh & Poplar (as well as other places in the area) for filming next Tuesday for a production called “Wikal”. After doing a little investigating, I found out it is the production co. for Robert Pattinson’s new movie “Remember Me”, but they are trying to keep it on the downlow to avoid the frenzy of the media/paparazzi/screaming fans. Definitely newsworthy and will make for some great photo ops I am sure!

Signs about this production are all over the North Heights on Cranberry, Willow and Hick Streets as well.  However, ladies please keep your distance.  Seems that the Brit pretty boy is a little tired of over bearing New York girls.  The Daily News quotes an insider who says, “”Robert is dying to get back home… He’s so over everything. He’s overwhelmed by all the girls — they terrify him! He says girls grab his neck and clothing all of the time, and he’s not used to that. Fans don’t do that to him in London. Everyone there is a little cooler about the fame thing, which is what he’s used to.”