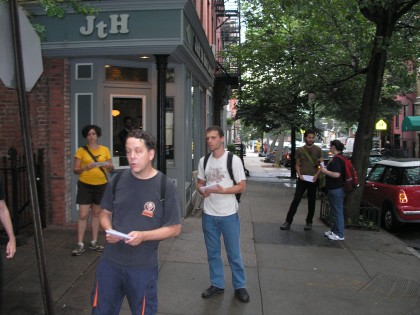 As the holiday weekend began in Brooklyn Heights Thursday night, protesters pounced on our friendly neighborhood gastropub Jack the Horse voicing their opposition to the eatery’s fish monger, Wild Edibles. According to eyewitness reports, the ragtag crew of 5 -6 attempted to stop customers from entering JtH while shouting “their fish is crazy!” 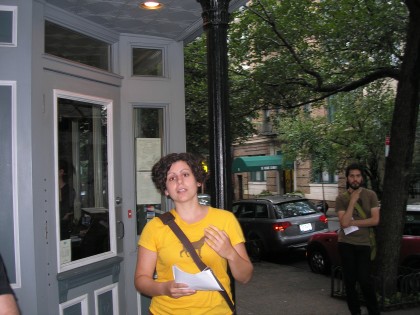 The group handed out fliers to customers and passersby and were most likely affiliated with an activist organization called Brandworkers.

Jack the Horse owner/chef Tim Oltmans tells BHB’s Sarah Portlock, “Two weeks ago they, the protest group, called me and tried to get me to make a commitment but I was in the kitchen trying to get stuff done and I couldn’t talk to them so they tried a different tactic [by protesting Thursday].”

Post demonstration, the overwhelming sentiment inside JtH was that the protesters didn’t seem very concerned about the workers inside the restaurant earning a living and whose business they were disrupting.

Like many restaurants in New York City, Jack the Horse buys its seafood from Manhattan based Wild Edibles. In 2007, the company was sued by 16 employees from its Queens warehouse who claim that the company owed them overtime pay and wouldn’t let them unionize. The former Wild Edibles workers, who are also members of the advocacy group Brandworkers International and the union Industrial Workers of the World have attempted to “persuade” restaurateurs to stop buying from the company by staging protests in front of their businesses. In July 2008, Wild Edibles filed for bankruptcy protection. At that time Crain’s reported that the distributor had lost 33 accounts due to the labor dispute. Eater has covered this “drama” extensively.

However, according to documents obtained by BHB, a settlement was reached in October 2008 with Wild Edibles agreeing to compensate the workers . Reportedly, payments are being made this week. . Brandworkers tells us that agreement was never fully executed, hence their continued demonstrations. [Review documents here for more info: Page One Page Two Page Three Page Four]

Wild Edibles owner Richard Martin says that none of the plaintiffs in the case appear to have been part of Thursday’s protest. He adds, “If they have accepted the deal and I’m just a little confused why the protests. Last week there was a settlement, lawyers have agreed on it, now we’re just drawing up the contracts and I’m looking forward to moving on with my life.” [Updated 4pm 7/7/09]

Brandworkers Executive Director Daniel Gross claims the situation is not that clear cut. “It’s accurate to say that we can be cautiously optimistic that we’re on the right track but there’s absolutely no agreement and there won’t be an end to the dispute until there’s an agreement, which is agreed upon by all sides and is executed as signed.”

As for the Brooklyn Heights protest he says, “It’s always our goal to reach out to restaurants and create a dialogue and the way it happens is we reach out and set up a meeting with the workers, along with folks from Brandworkers and have a meeting and there’s so much evidence of wrong doing and retaliation by Wild Edibles, especially when you hear it from the workers themselves, it’s a very compelling story. We’re able to move forward in a positive way. In the case of Jack the Horse Tavern we were hoping to move forward in a positive way, and then we still hope that. It’s just at this point we haven’t received indication yet that Jack the Horse Tavern wants to show concern for the conditions along the supply chain.”

He also disputes eyewitness reports that protesters were blocking the restaurant’s entrance. “No one was stopped at the door. There was no call of a boycott. We’ve been doing this for two years and it’s always the same message and the same approach. No one was blocking the door. Just strictly educational about the fish product. The community members we spoke to were of the mindset that a restaurant should be concerned about working conditions along its supply chain.” [Updated 7/7/09 4:30pm]

We’ve obtained a sample of an email reportedly sent by Gross to area restaurateurs as well as a series of responses sent out by Wild Edibles which provide some insight into the contentious conflict: [Page One Page Two Page Three] 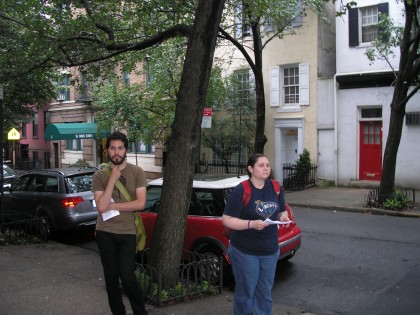 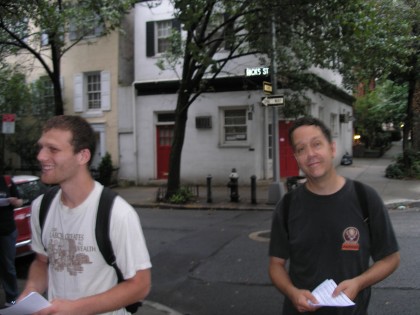 And does the gentleman in this video look familiar? He should because he’s one of the folks who were part of the JtH protest on Thursday. This YouTube video shot last year by nextleftnotes should give you an idea of the approach, tone and attitude of the Wild Edibles opponent group. [Updated 7/7/09 4:35pm]

Given its date and location, do you think that this demonstration was an effective way for Brandworkers to gain support?

Oltmans tells us that the protest didn’t hurt business at all adding, “After half an hour it started raining and they all ran away.”

BHB’s Sarah Portlock is investigating and we’ll update you soon.

[Disclosure: Homer Fink has been a member of trade union American Federation of Radio and Television Artists (AFTRA) since 1996.]