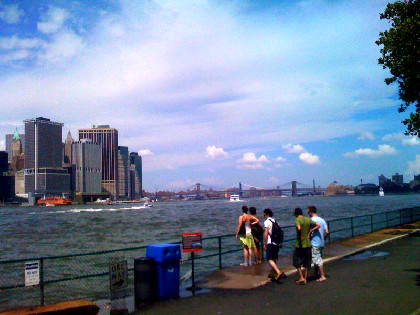 Hey! I can sorta see my house from here!

We made it out to Governors Island yesterday via the free ferry from Fulton Landing.   We stumbled upon Creative Times “This World & Nearer Ones” art exhibit which is taking the island by storm this weekend.   Mrs. Fink and I were amused by Nils Norman’s tent installation by Castle William as well as the many exhibits in the island’s abandoned residences.  We hope that whatever the future holds for the Island, which is now under NY State control, includes preserving the intimate feeling and historic landmarks that it offers.

You can read up on and participate in future park plans via The Park at the Center of the World and stay up to date on park events via the Governors Island blog.

Hey Island historians — while we suspect that Poppa Fink spent some time at Castle William after being picked up for being AWOL (hey it was to see Charlie Parker, we think) from the Army in Times Square right after WWII, was it more likely he cooled his heels at Fort Jay?