The third season of the FX drama Damages is chock full of scenes shot in Brooklyn Heights and DUMBO.  Playing a crucial role in the time shifting script this year is the t-bone car crash filmed on Willow and Cranberry Streets in November. Parts of it are featured in the promo above with the full […] 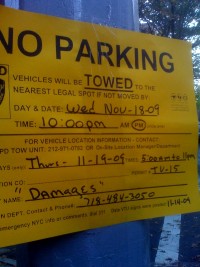 Damages to Film in Brooklyn Heights on Thursday

Brooklyn Heights is no stranger to the FX drama Damages which filmed much of its second season in and around Brooklyn last year.    Oscar winner William Hurt took up temporary residence on Willow Street during the filming and even caused some controversy at a local bistro. The series is now shooting its third season, […]