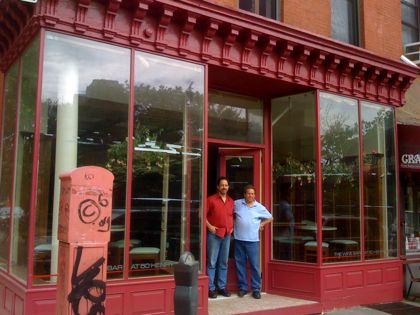 The owners of the new Brooklyn Heights Wine Bar were out this morning putting final touches on their new space at 50 Henry St., and owner Mark Lahm said the spot will be open within the next three weeks.

“We wished we could have opened earlier, but there were things out of our control,” Lahm said. “There’s one piece of officialdom we haven’t gotten yet,” but did not elaborate.

On Friday, the State Liquor Authority approved their application and granted them their all-important liquor license. Part of the timing delay, Lahm has explained, is because they wanted to get their own license and not be affiliated in any way with the former Wine Bar at 50 Henry spot that closed in the wake of the Busy Chef scandal last summer.

The paper curtains were down today to reveal new furniture, but Lahm said the curtains might go back up while they put the finishing touches on the completely-redone space. They are also finalizing the menu, which he said early on would be a collection of small plates of cheeses, charcuterie, soups, and “interesting salads.”

Lahm also owns Henry’s End at 44 Henry St., and is partnering with Jim Montemarano, who owns the coffee shop Cranberry’s at 48 Henry St., on the wine bar project.