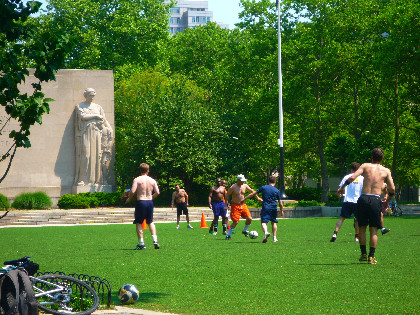 Saturday morning, we checked out the controversial soccer players at Cadman Plaza Park. Overall the group of players, mostly men and over 30, seemed downright mellow. While they did take up most of the turf field, there didn’t seem to be much competition for using it. One family played frisbee on the turf while the game was being played. And the only casualty there seemed to be the little boy’s interest in frisbee — seems like he caught “futbol fever” after seeing a goal scored.

Reading at Bookcourt on June 1st, Because I Love Her
Catch up on The Homer Fink Show