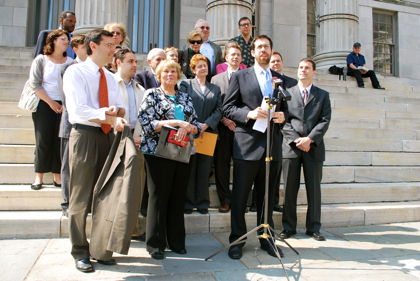 Brooklyn Heights is not a parking lot — that’s the message elected officials shouted from the steps of Borough Hall on Friday morning.

State Senator Daniel Squadron and Assemblywoman Joan Millman recently introduced joint bills in Albany outlining a proposal to allow residential permit parking in the surrounding neighborhoods, and a who’s who of Brooklyn Heights’ political elite stood behind them to rally support.

The bill — the full text of which is here [pdf] — calls for residents to purchase permits “for a nominal fee,” Millman added later, that would allow them to park on 80-percent of residential streets throughout the neighborhood. Commercial streets would still have metered parking. The permits would arguably keep commuters who drive to work in the Heights away from the streets, and raise revenue for the city and MTA coffers, Squadron said. Under the bill, fines for illegal parking would go to the city, but the permit revenue would go to the MTA to improve the bus and subway systems.

“This plan is a classic win-win-win: it protects the community, it cuts congestion, and it provides revenue for public transit,” he explained.

The bill must first pass the state legislature before it goes to the city, and Councilman David Yassky vowed to help it sail through the Council. The specifics of how the plan would work would be up to the relevant communities, and those details will be sorted out during the public hearing process, should the bill be passed, Millman said.