On Saturday on Brooklyn Bridge Park’s Pier 1, Tish James, NYS Attorney General received the endorsement of The NYC District Council of Carpenters, aka “Carpenters Rise.” The group is a consortium of eleven unions representing NYC’s skilled Carpenters, Millwrights, Dockbuilders, Timbermen, Cabinetmakers, Floorcoverers, and Industrial Workers. Joe Geiger, Executive Secretary-Treasurer proclaimed, “No one is more qualified to be the “People’s Lawyer” than Tish James.”

Supporters wore neon, safety-orange shirts. They cut a bright contrast against a clear blue sky, the Brooklyn and Manhattan Bridges, and the towering NYC skyline. Newly-minted union member, Cesar Santos shared that until he became a union member, he was often paid half that of unionized workers. His pay was often withheld too. Nora Vega (left) thanked her union for creating opportunities for women to work in construction. She is a graduate of the Non-Traditional Employment for Women (NEW) and through the District Council recently leveled up from Apprentice to full Carpenter. 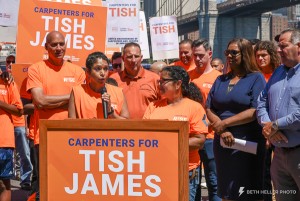 In accepting the endorsement, James praised the workers’ contributions to NYC and emphasized unions create benefits for everyone, not just workers. “The reason we have a middle class is because of labor…The reason we have a minimum wage, the reason we can enjoy this beautiful weekend is because of unions. We should support labor!” She pledged her continued efforts to root out corruption in the construction industry.  And, in the wake of mass shootings and two conservative Supreme Court rulings, James emphatically pledged to staunchly defend the need for access to abortion and the passage of common-sense gun regulations. 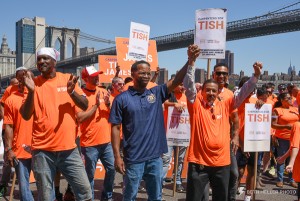 In other political happenings, TODAY is the day for NYC Democratic Primaries for Governor, Lieutenant Governor, Kings County Civil Judge, one female and one male representative for D52 Assembly Leader positions, nineteen Judicial Delegates to D52, and Alternate Judicial Delegates. Confused? Find your polling site and explanation of the ballot HERE. The polls close at 9:00 pm.