This past week, a structure being installed smack center in Columbus Park stopped pedestrians in their tracks, curious about what was going up. Shown in the photo above, as a work still in process, is Mind Forged Manacles/Manacle Forged Minds by Fred Wilson, an acclaimed artist whose work has exhibited in museums around the world. The stunning, thought-provoking sculpture will be completed by Tuesday, when More Art and the Downtown Brooklyn + Dumbo Art Fund will host an opening reception on the plaza between Johnson and Montague Sts. The reception will feature a live music performance by Daniel Carter and Ayumi Ishito, along with opening remarks.

Fred Wilson was on site during the week’s installation of his first public art work and shared, “It’s been a long time coming. I’ve been interested in doing decorative ironwork and I’ve also been thinking about what ironwork is intended for, which is for the containment of people and also for keeping people out. This is the perfect public space for it. This particular spot is great because people are relaxed and in the mood to take it all in. These are real New Yorkers who are asking questions, and are interested and curious. I’m thrilled about this work being in Brooklyn, where so many people come from everywhere and are making it happen and making it work.” 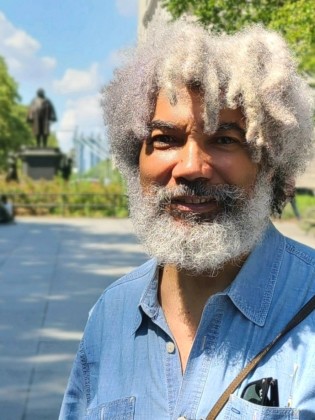 More Art on the work:

“The use of ornamental gates and fences serves as a metaphor for security and gated communities, insecurity, the incarceration of Black men, the detainment of illegal immigrants, policing, and William Blake’s concept of Mind Forg’d Manacles — self-created barriers to personal and societal growth and freedom, built by fear, division and perceptions of difference. These gates, whether they are to keep others out or keep someone in, act as reflections on the separation of people, both physically and mentally.

Mind Forged Manacles/Manacle Forged Minds, while not strictly site-specific, creates, connects and amplifies a conversation about the sculpture and the monuments and buildings around it that currently reside in Columbus Park. The viewer is encouraged to be ‘site conscious’ when looking at the work and its location, as it is positioned between a sculpture of Henry Ward Beecher — a 19th century Congregationalist clergyman known for his support of the abolition of slavery — and the statue of Columbus, as well as the Kings County Supreme Court building — exploring issues of justice, freedom, slavery and mass incarceration.”

The sculpture will be on view through June 27, 2023. See more works by Fred Wilson on the Pace Gallery website.