New sidewalks in the Heights

By Sarah Portlock on May 12, 2009 4:25 pm in Brooklyn Heights, Development, Transportation 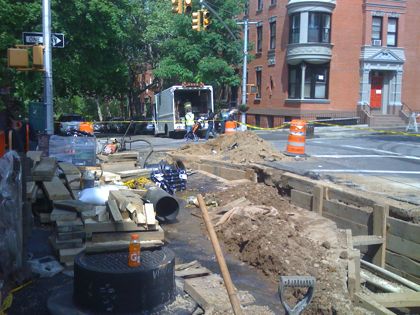 Notice a lot of roadway construction in the neighborhood lately?

The Department of Transportation is currently in the midst of an 18-month, $4.5-million renovation project to build new wheelchair-accessible sidewalks along 47 intersections in Brooklyn Heights, Boerum Hill, Cobble Hill, Carroll Gardens, and Fort Greene. More information about the big project is on the DOT Web site here.

The work will extend the sidewalks and create new curbcuts, and each corner takes about six weeks to repair, said city inspector Ishwar Patel.

On Tuesday, construction crews shut off residents’ water supply along Joralemon Street, near Hicks Street, while they moved the water pipe and replaced its valve. Pipes must sit below the roadway, not sidewalks, as one worker explained. Crews are building new sidewalks at the southeast and northwest corners of Joralemon and Hicks street.

“It is for the pedestrian, so he can walk safely,” Patel said.

According to the project plan book Patel showed BHB, other corners in the Heights that will be or are repaired include:

And, elsewhere in the area:

The Herd for the 33rd: The Magnificent Sumthin’ Seven
LICH Chief: Hospital at “Important Juncture”