Proposed Connection to BBP is Wack 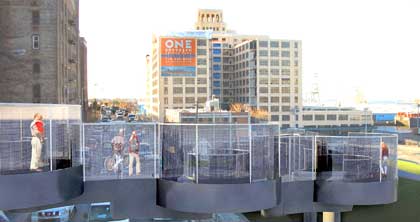 The Brooklyn Eagle printed the above rendering of one of the proposed connections from the nabe to Brooklyn Bridge Park.  What is this crap? Was this designed by the same person who did the sets for Woody Allen's Sleeper?

Brooklyn Eagle: Bridge Park Planners Stress Bikes, Buses, Ferries — But Not Cars: Changes to the entrances to Brooklyn Bridge Park at Old Fulton Street and Atlantic Avenue could add two acres of greenery to the area, create wider sidewalks, provide new exit ramps off the BQE and modify 150-yearold intersections.These were among the recommendations made by the Brooklyn Bridge Park Waterfront Local Development Corporation(LDC) on Tuesday night at a public meeting held in St. Francis College.The LDC has been charged with reviewing transportation and access opportunities to and from the park to reduce the use of autos. A preliminary report includes bike route improvements, bus route changes, and use of auxiliary buses and waterborne ferries. It also recommends a possible Clark Street subway connection and vertical connections to the Brooklyn Promenade.

Update from the full article:

For a long time, people have contemplated a tunnel connection between the proposed park and the Clark Street subway station, but the planners noted that to create a viable pedestrian tunnel would be “extremely expensive.” Renderings were nonetheless shown.

Discussions were also held about a connection between the Promenade to the park. If it is built at Montague Street, it could compromise the view plane from the Heights. An alternate plan would construct a bridge and ramp from Remsen Street down to the park.

After this week’s meeting, preparation and submission of a final set of preferred options are scheduled. Included may be some pilot studies, especially concerning shuttle bus connections. A final report should be released in late spring or early summer.