I Was a Blogfest Virgin (and still had a good time) 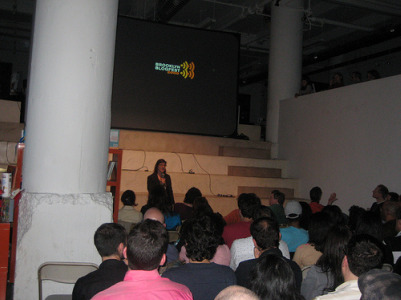 The second I walked in the door to the Brooklyn Blogfest 09, with my friend and literary agent, Deirdre Mullane, I found myself deep in conversation with a charming and passionate politician-in-the-making.  Medhanie Estiphanos is running for New York City Council to represent District 35.  He said the public school system is broken.  As an educator in the CUNY system, I agree. In his words, “We need to instill a culture of accountability.” Truer words were never spoken my friend.

Next I looked for the free white wine, but instead found bottles of water and raffle tickets.  I prayed for the digital camera.  Melanie Hope Greenburg said hi, even though I had never met her.  She’s read my posts on art and culture in the 11201 and beyond.  Her blog is called Mermaids on Parade.  I took her card as D. and I found our seats in the cavernous Powerhouse Arena Bookstore; the festivities were about to begin.  The crowd was humming, a baby was crying, a man on the floor was twittering.

Louise Crawford (Photo above: yardena 2009), of Only the Blog Knows Brooklyn, took the stage.  I thrilled to the words, cash bar and free food at Galapagos Art Space.  She said in the year 2006, 100 bloggers attended the first Blogfest.  From the size of the crowd around me, this has certainly changed.  It was a sea of bloggers in the bloggiest ‘burb in America.  She also said the event was about gaining insight and cultivating a community for writers— and that this year the evening was dedicated to the memory of Robert Guskind, and his amazing blog, Gowanus Lounge.

Next up: Picture Brooklyn; A Tribute to the Borough’s Photobloggers by Adrian Kinloch, Brit in Brooklyn.  My favorite was a shot of a storefront; Lone Wolf Liquor.  Loved it.  Loved all the images— the yellow Volkswagen, the Coney Island Wedding, the Smith Street Subway mosaic.  I loved Blogs-of-a-Feather, group sessions led by notable bloggers like Jake Dobkin, Gothamist.  As I wound my way around the room, I ran into an old friend of mine, James M. Vogel, who now works for Senator Velmanette Montgomery, 18th NYS Senate District.  Back in the day, twenty years ago, we were on tour together with the cheesiest Broadway revue ever.

Final stop: Galapagos for the after-party.  The pizza was excellent.  I didn’t win the camera, but I did get a chance to meet the faces behind the URL’s of the folks here at Brooklyn Heights Blog.  Yes.  Blogfest 09 fulfilled its mandate.  As a newcomer to this arena, I had fun, felt part of a larger community, made new friends, found old friends.  I was a Blogfest Virgin, and I still had a good time.