Gothamist reports elite Brooklyn Heights private schools are among institutions that received millions from the Federal Paycheck Protection Program (PPP). Private schools are eligible for PPP because they are considered non-profit businesses. According to data released by the Small Business Association, St. Ann’s, Packer Collegiate, Brooklyn Friends, and Brooklyn Heights Montessori all received loans. This money is in addition to CARES Act funding.

While exact amounts are unavailable from the SBA, Packer, and St. Ann’s reportedly each received PPP loans of $5 – 10 million dollars each. Brooklyn Friends received $2 – 5 million in PPP and Brooklyn Heights Montessori School $1-2 million. The loans have a 1% interest rate and, per Gothamist, “are eligible to be forgiven if the money is used on payroll, interest on mortgages, rent, and utilities.”

In contrast, NYC public schools got smacked with the short end of the financial stick. The DOE was slated to receive $717 million in CARES Act funding. However, recent changes proposed by U.S. Department of Education Secretary Betsy DeVos could cost NYC’s schools over $100 million. As a result, Gothamist reports, NYC has joined a lawsuit which “charges that the federal Department of Education is violating a federal education law called Title I.” On the Federal level, public schools are not eligible for PPP.

The pandemic has also saddled New York City with a $9 billion dollar overall revenue shortfall. Speaker of the Council, Cory Johnson described the passage of the 2021 Fiscal Year budget on June 30th as “heart-wrenching” and “full of impossible choices.” The Department of Education budget took a $462.9 million dollar hit with most of the cuts to “fall on classroom instruction, according to an analysis by the Independent Budget Office” reported ChalkBeat. For a complete breakdown of the DOE budget click HERE.

Less widely known is that schools will also suffer a shortfall of Fair Student Funding, the monies a school receives per student based on their individual needs. Families waiting to have their children evaluated by the DOE as part of the IEP (Individualized Education Plan) process are in limbo and ultimately so is the funding they may be granted through the process.

The DOE halted all in-person during the shutdown. They cannot be conducted effectively online or by video. No evaluations mean no diagnoses. Without it and the subsequent IEP meetings with the School-Based Support Team (made up of teachers, social worker, school psychologist), a student struggling with learning challenges cannot receive their services.  As such, their school won’t receive the necessary additional funding to cover the costs for the coming academic year. Furthermore, most schools are not even funded 100% of their Fair Student Funding each year, to begin with.

It will be up to Principals and their School Leadership Teams (SLT) to determine how and where to cut expenses within the operating budget to ensure kids receive what they need. This places impossible pressure on individual schools, especially those in poorer, under-served neighborhoods. 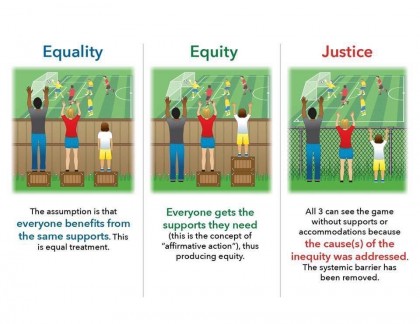 The pandemic has laid the achievement gap bare within the DOE, the country’s largest and most segregated school system. NYC’s public schools serve 1.1 million children. According to Columbia University’s Bank Street Graduate School of Education, two out of five children in NYC live at or close to the poverty line.

The Return to School 2020 website lists greater equity among the DOE’s guiding principles. “We will not look away from the ways this virus has further magnified the effects of systemic racism in our communities. We will continue to explore opportunities to directly correct structural inequities—like closing the digital divide.” And, the blog will continue to report on how COVID impacts Education.

CORRECTIONS: This article has been updated to replace an incorrect link to Gothamist and reflect private schools are non-profit and not “for-profit” businesses.