For the second time in four years, Xtend Barre BK is saving my life.

OK, that’s hyperbole. But it’s not an exaggeration to say that the exercise studio on Remsen Street has saved my sanity and my soul during two life-threatening crises.

In the autumn of 2017, I was coming off six months of chemotherapy and surgery for breast cancer. It had been ages since I’d done anything more vigorous than walking, and my body felt feeble and foreign.

For years I’d walked past that inspirational photograph outside the Xtend studio, and for some reason I thought that barre was a kind of more-challenging restorative yoga, with lots of soothing stretching and strengthening. So I signed up.

Boy, was I ever wrong. Yet walking up the stairs to the studio is still one of the best things I’ve ever done.

I’ve no training in ballet and my fitness level was pretty much non-existent. But the owner of the studio, Kristine Storie; the manager Maria Gardner, and my first instructor Amber Nalle (little did I know that she’s considered one of the most ass-kicking instructors there—it was, to say the least, an intense introduction) all welcomed me, offering modifications for exercises that were too hard or too fast for me, becoming my biggest cheerleaders as I gained strength through cardio and Pilates classes. Every single time I walked in the door, I felt like I was walking into a community that had been designed exactly for me.

Two and a half years later, as the city slowly closed to ward off pandemic infection, Xtend, too, shut its doors, even before the mandate, recognizing the futility of trying to keep an exercise studio clean enough for safety.

But shortly thereafter, Kristine and the gang began live Zoom classes at a reduced rate ($10 a class), with all proceeds going to the instructors. A six-class package is $50.

“Kristine wanted to stay open for as long as possible and we tried to make social-distancing work, but we realized it wasn’t really safe to stay open,” explained Hannah Flam, an instructor and the studio’s marketing and communications coordinator. “We started getting requests from clients and we noticed that other facilities were offering virtual classes.”

The initial roll-out was modest, with just a few of the studio’s many types of classes available online, and only during the actual live event. Over the last few weeks, the studio has made recordings of the classes available for a limited time and expanded its offerings. So, for instance, if you really want to take Chelsea’s 5:30pm barre class but that comes at a bad time for you, you’ll have until 9am the next morning to take it. 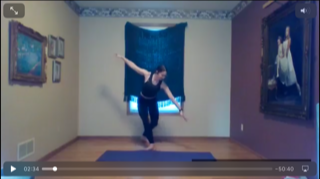 Hannah Flam leading a virtual barre class from her parents’ home in Minnesota.

The classes require no equipment at home, though some light hand-weights, a mat, and a band would be useful to have if possible. The Xtend classes that require equipment, like TRX and Pilates Stick, aren’t offered.

Classes average about 30 clients per session, significantly more than the studio space accommodates. New, existing, and former clients log in from across the country and around the world.

“We’ve had some former clients who have moved away come back to classes,” said Flam. “I love how inclusive the format is and that we’re able to reach people outside of our community and our home base.”

Though like most of us, the Xtend crew isn’t planning too far in advance, but Flam acknowledged that this experience has led to conversations about how the studio’s virtual reach might continue once the studio can re-open.

You don’t have to be an existing Xtend client to purchase and attend classes; new members are welcome, and out of a terrible situation has come new opportunities for the studio that’s been in our neighborhood since 2014.

“It’s a business and we want to make money,” said Flam, “but we also want to create a community where people can work out, have fun, and feel good about their bodies. We wanted to keep our studio community alive even if we can’t be together in person.”

To learn more about Xtend Barre Brooklyn, check out the studio’s site and Instagram page.

Subway Service Alerts, Brooklyn Heights and Nearby
Squibb Bridge is Back!