What would we do without Mary Frost and her superb local reporting? In this post, we link to her report in the Brooklyn Eagle that Squibb Bridge has gone the way of the Tappan Zee. Demolished.

After years of gestation and labor that cost $5 million, Squibb Bridge was born on March 21, 2013 to the delight of all who visited Brooklyn Bridge Park. Karl Jungersfeld beautifully documented the joyous birth in a video for BHB. Every media outlet in NYC and even Popular Mechanics could not stop fawning on and on about the bridge. The birth announcement in the New York Times described the bridge as “an undeniable frisson of excitement, zigging and zagging some 50 feet above the ground.” At the time, Ted Zoli, the engineer who designed the bridge, chuckled at the overabundant praise of how the bouncy bridge complimented the Brooklyn Bridge nearby. “No bridge engineer would ever compare his work to the Brooklyn Bridge,” Zoli said. “That would be the height of hubris. But at least it doesn’t detract.” Hubris, did he say?

Squibb Bridge spent just over a year soaking in the adulation and spreading joy to all who traversed it. Until August 2013, when it closed the first time due to “warping” and with assurances that it will reopen in a few weeks. A few weeks passed, and years, and finally at a raucous community board meeting on February 26, 2015, the BBP Corp. announced that it will cost $700,000 to resuscitate the bridge. In the end, it cost $2.5 million to bring the bridge back to life 32 months later in April 2017, but with a lot less bounce in its step, as reported by the New York Times.

Alas, hopes of the Squibb Bridge returning to its glory and living a long, productive life were shattered in July 2018, when BBP announced that the bridge was “temporarily” closed due to the discovery of a piece of wood in bad condition. Over the next months, BBP updated the bridge’s prognosis which sounded more and more dire. Then, in December 2018, BBP announced that the bridge would be totally replaced with a new bridge expected in “the Summer of 2020.”

I, for one, will have a hard time calling the new bridge “Squibb Bridge,” as if the first one never existed. Tributes and odes to the bridge are welcome in the comments. I’ll start: 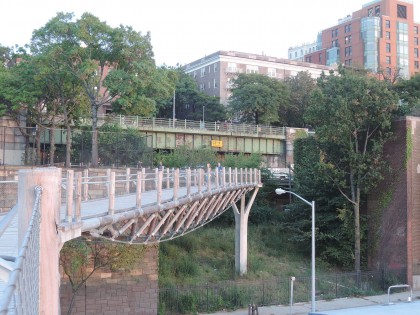