Squibb Park Bridge Has Arrived from Karl Junkersfeld on Vimeo.

Squibb Park is now open, and I joined a few daring souls who took the first small steps over the BQE, taking into account the sign at the bridge entrance asked “Is That a Bounce in Your Step?”

I also joined a media event already in progress—a beaming Regina Myer posed for photogs, and designer Ted Zoli shared a few interesting facts with reporters about the bridge. When I’d watched it being built, it reminded me a bit of Swiss Family Robinson. But according to Zoli, the look was “adopted from techniques used in farming for a park setting.” This not only includes the wood, but the mesh wiring on either side. A few more interesting facts, courtesy of the designer:

—The bridge is made largely of a type of wood often seen on fence posts called black locust, which Zoli calls “indestructible.” It’s used throughout the park. As it ages it will turn from blond to gray. (As do many of us.)
—Although black locust is terrific structurally, it’s not often used because it’s not commercially cultivated.
—About 100,000 pounds of wood was used, which came mostly from Pennsylvania and Long Island. 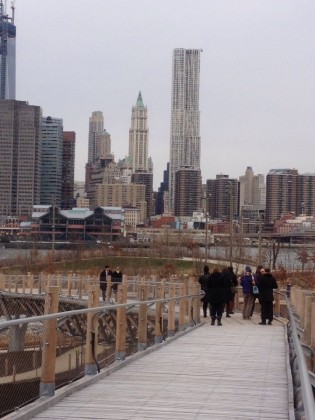 —The spans were mostly prepared off-site and then set in rather quickly. The minimal need for a crane reduced the cost.
—Speaking of which, the total cost of the bridge was about $5 million.

So if you’re reading this post in time for your lunch break, ditch work have a look!

Gothamist was there too, took some photos, and shot this video:

A Walk Down Squibb Pedestrian Bridge from Gothamist on Vimeo.