On Monday (Labor Day) morning, a group of bird enthusiasts, your correspondent included. met with Heather Wolf, author of Birding at the Bridge, for a walk around Pier 1, Brooklyn Bridge Park, to try to spot birds during the fall migration. As luck would have it, the first bird we spotted was an American Robin (photo; in front of a sumac drupe which at first I thought might be a male Cardinal). 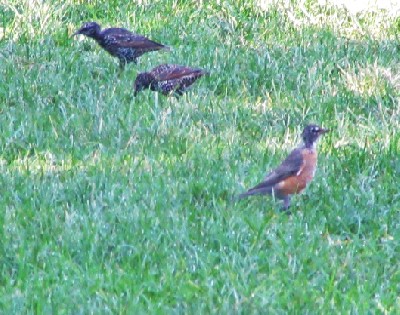 Indeed, early in the walk we seemed only to spot species common to the Park, if not year around, at least most of the year. Above is another robin, along with two European Starlings. The latter, as their name implies, are an “invasive species.” All of the 200 million in North America today are said to be descended from a flock of sixty imported and released in Central Park in 1890 by Eugene Schieffelin, who wanted to introduce into America all of the birds mentioned in Shakespeare. However, no one seems to have found a reference to starlings in the Bard’s works. One source indicates Schieffelin may have impoted them just to rid his garden of caterpillars. 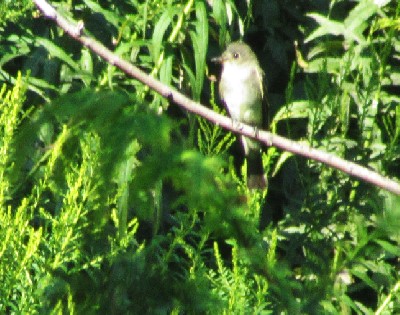 Up to this point Heather had pointed out various migratory species, mostly thrushes and warblers. Unfortunately for me, whenever I lined up a camera shot on one of these birds, it would immediately fly away. I finally got payday with the Alder, or Willow, Flycatcher in the photo above. Heather said the two types are so similar that they can be distinguished only by their calls. They are usually quiet, as this one was. Fortunately for my camera, they tend to stay still on branches until a fly comes by. 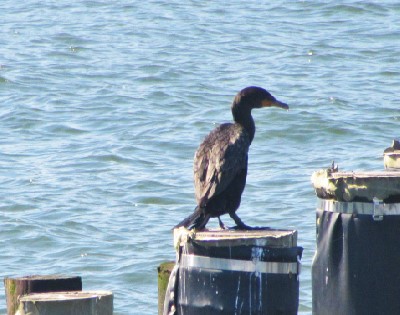 Moving to the south end of the pier, we found this Double Crested Cormorant resting on a piling… 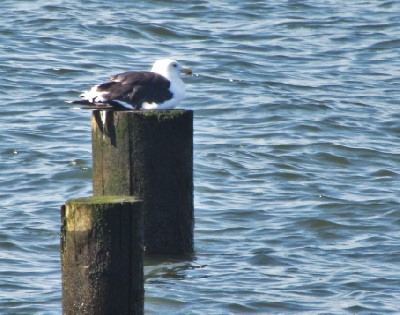 … and we also spotted this Great Black Backed Gull. Heather said it’s the largest known in the Americas, and possibly in the world (though that’s in dispute). 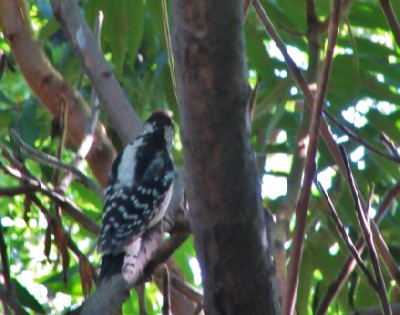 Heading back into the trees, we heard a tap-tap-tapping, and spotted this Downy Woodpecker. 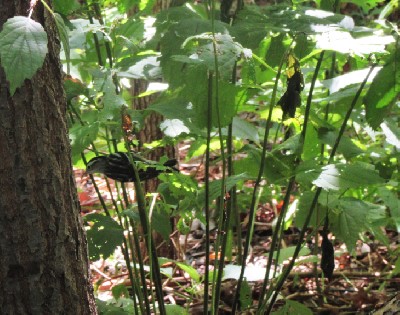 After we bade Heather farewell — she counted 24 species we saw on this walk — and I headed back towards the Heights on the path that leads through the woods on the inland side of Pier 1, I spotted a bird I had missed earlier, a black and white warbler (photo above). If you like birds, or nature generally, or just getting out to see something other than just the usual, I highly recommend these walks.