Court hearing on Pier 6 towers has been rescheduled–see below. At Monday evening’s annual meeting of the Brooklyn Heights Association, BHA President Patrick Killackey (photo) began by asking, rhetorically, what a neighborhood association can do in a time of political turmoil. He answered by arguing that the nature of the times requires more action at the local level. We might not, he said, be able to bring about the disarmament of North Korea, but we can do, and have done, things that can improve our lives and perhaps inspire others to do more, both in our community and in others. As examples, among others, he cited the Promenade Gardeners and those who fought to reduce helicopter noise in the Heights and nearby.

Mr. Killackey noted some new developments. The BHA House Tour, which ended in 2015, will be replaced with a new Designer Showhouse event to take place in September of this year. More details are forthcoming. On Monday, March 6, there will be a hearing in court on the BHA’s lawsuit to prevent construction of two high rise residential buildings near the Atlantic Avenue entrance to Brooklyn Bridge Park. Update: The new hearing date before NYS Supreme Court Justice Lucy Billings will be Friday, March 17th at 11:00 AM at 71 Thomas Street, Room 203, in Manhattan.

Mr. Killackey noted with regret the departure of DCI Centa as commander of the 84th Precinct, but expressed confidence in his replacement, Capt. Roberto Melendez. Mr. Killackey reviewed the progress that had been made under DCI Centa, including the installation of cameras on Joralemon Street and the appointment of two community affairs officers to Brooklyn Heights. 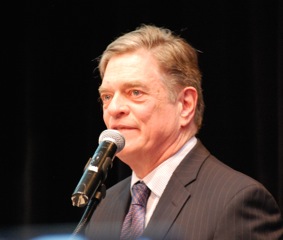 Awards for community service were presented by Heights resident and Channel 13 personality Tom Stewart (photo above), who got a good laugh for announcing that the first award went to La La Land. The real first award for community service went to Irene Janner, who served on the P.S.8 PTA during the years of the school’s transition from struggling to desirable, was instrumental in laying the groundwork for Brooklyn Bridge Park, and was treasurer and office manager for the BHA. The second was to Love Our Pool, a group of parents who fought to keep the Pop-Up Pool in Brooklyn Bridge Park open for at least another summer, while the Park finds another way to provide a swimming venue. The third was to community activists Judi Francis and Ren Richmond, and to the law firm Jenner & Block, which has donated its services pro bono, for their fight to keep high rise towers from being built near Pier Six in Brooklyn Bridge Park. 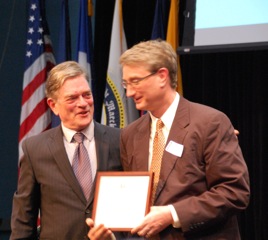 The BHA’s top award, the Martha Atwater Award, went to Seth Phillips (photo above), who became principal of P.S.8 when it was still a struggling, underperforming school to which local parents tried to avoid sending their children, to one so successful that it now has an overcrowding problem. He was also instrumental in expanding the school, and in establishing a new middle school, I.S.8, to relieve the shortage of nearby, attractive middle school options for local students.

The meeting concluded with a panel discussion, moderated by New York Times writer Jim Dwyer, and featuring experts on transit matters. The topic was the proposed “Brooklyn-Queens Connector,” a streetcar line that would connect Sunset Park in Brooklyn with Astoria, Queens. The panel members were. in general, skeptical of the project. The notion that the project could be financed by property tax increases on adjacent properties was questioned because the properties along the line were either fully developed or too small to produce the needed revenue. Engineering problems related to the route being mostly within a flood plain, and lacking a dedicated right of way, which would mean traffic delays. Concerns were also expressed about the ability of the proposed route to connect with other means of transit, such as subways and buses. Finally, it was argued that money would better be spent on improvements to transit on underserved areas like East New York and others on the City’s edge. One panelist said that underserved areas near the proposed BQX route, such as the Red Hook Houses and other NYCHA housing near the Queens waterfront, could be served more economically by providing better bus service connecting to subways.

The audience seemed mostly hostile to the BQX proposal, as each criticism of it from the panel attracted a vigorous round of applause.

All photos by Andrew Porter.