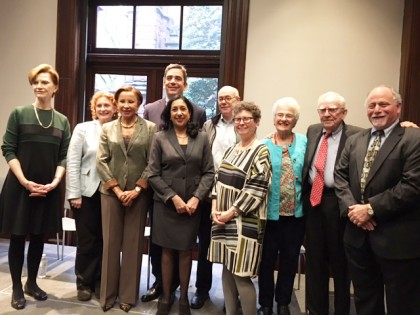 During her introduction, Deborah Schwartz reflected that the occasion celebrated “the rich history and exquisite architecture of [Brooklyn Heights] and the community of people who have worked so hard to maintain its integrity.”  She also cited the “extraordinary and legendary people” who have called Brooklyn Heights their home including Henry Ward Beecher, Truman Capote and Arthur Miller among our many notable residents. (Truman Capote’s Brooklyn: The Lost Photographs of David Attie is currently on exhibit at BHS).

Congresswoman Velazquez, who is credited with securing $450,000 in federal grant monies to restore the “Bishops Crooks” lamp posts to Brooklyn Heights, shared “Not only is Brooklyn Heights an important part of New York’s history, but when it was named a ‘Historic District’ fifty years ago, it helped pave the way for the protection of other culturally significant sites around the country.” 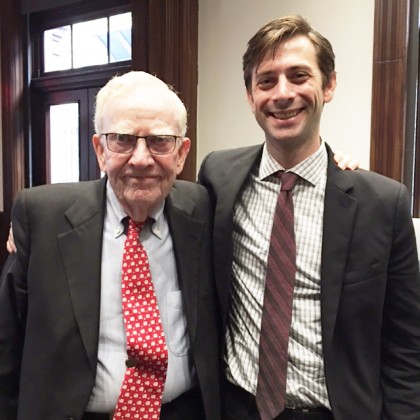 Later in the program, Peter Bray, spoke to the “inextricable link between our “architectural and cultural history,” explaining that “historic preservation embodies what we value as a society” and in effect keeps history alive in both our own minds and the public consciousness.  He praised ongoing efforts of the Landmarks Preservation Committee and Community Board 2 to include 181 (The CitiBank Temple) and 185 Montague Street, a 15-story office building with a beautiful Art Deco facade, into the historic business district of Brooklyn Heights.

Joshua Laird, provided a brief but in depth history of the evolution of preservation-the establishment of our National Parks (1917), the National Registry of Historic Places (1931) and NYC’s Landmark law (1965)-sharing “we are bound by our past and blind to our future without some appreciation of where we have come from.” The National Register of Historic Places now has over 90,000 properties, of which 900 sites are in New York City with 172 in Brooklyn.  The most recent addition: The Stonewall Inn, the birthplace of the LGBTQ Civil Rights movement.

After thanking all the key stakeholders, Steve Levin reflected on the role of history in modern politics. He cited the recent post-Presidential debate discussions on the peaceful transition of power. Evoking the image of George Washington crossing the East River at Fulton Ferry Landing,  he said, “We are nothing without our history…[Brooklyn Heights] is so rich with this nation’s history…going back to the revolutionary war. And it is so tied into who we are as a country.” 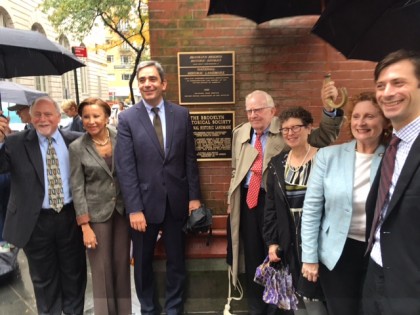 Otis Pearsall bestowed gratitude upon The National Park Service, The Brooklyn Historical Society, Congresswoman Nydia Velazquez and Councilmember Steve Levin he regaled the crowd with a detailed recounting of the original dedication ceremony. He beamed with pride that the community now has an “exact replica, (securely fastened!) to the front of the Brooklyn Historical Society.”

Though wet, the brief unveiling ceremony and subsequent photo-op went off without a hitch. Those who chose to brave the rain were treated to a short but detail oriented walking tour of Pierrepont Street with Architectural Historian, NYU Professor and world-renowned tour guide, Francis Morrone.