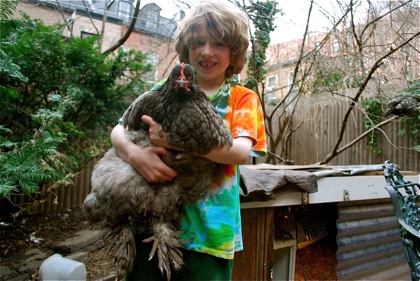 In the heart of Brooklyn Heights, on Hicks Street, the Holbrooke family is raising five chickens.

Why not, nine-year Heights resident Sarah Holbrooke, 44, figured. The family likes eggs and they have a backyard. Plus, she noted, it will be fun for the kids.

Watch  Brooklyn Bugle video of the chicks at home

Holbrooke and her husband, David, 43, first heard about urban chicken farming last year and enrolled the family in a class at Stone Barn Farms in upstate New York. Sarah then visited mypetchicken.com, picked out six New York City-friendly breeds (small spaces, cold winters, kids), and the family had the day-old chicks within days.

A year later, the Holbrookes have a full-fledged coop in their backyard, a pail full of chicken feed, and, after the kids collect the eggs each day, a stockpile in the fridge for breakfasts.

“Yes, you can keep chickens, not roosters. Of course, the area needs to be kept clean and if it becomes a nuisance, the Health Department can issue a violation. Neighbors can call 311 to report this type of issue,” she said. The section of the NYC health code that discusses the list of prohibited animals is available here [pdf], and chickens are not on the list.

Holbrooke concedes that the one downside is the backyard, which has taken a beating. What was once a grassy play area is now a mud pit, following the harsh winter and March’s rainstorms.

But the benefits outweigh the costs, the Holbrookes say.

“We like getting the free eggs,” explains Wiley, 7, whose chicken is a blue Cochin named Casey. And his second favorite part? “Just holding them, if you’re really cold.”

The kids have really taken to the chickens, Sarah said, and each got to name one. The kids are excited to feed them every morning, and bring them table scraps and other organic goods from the kitchen. The Holbrookes’ chickens are:

The chickens have led to chicken-themed parties, and on Saturday, Wiley’s birthday party featured a yellow cake in the shape of a chicken, with frosting detail. The family plays rousing matches of Pin the Comb on the Chicken with Rolf the Rooster, a handmade poster tacked up in the living room.

But do the neighbors ever complain?

“The neighbors have been very nice,” Sarah said. “[The chickens] don’t crow, and they do buck-buck a little bit, especially when they lay an egg, but not loud enough to wake you up. They’re not any louder than the birds back there.”

In New York, it is legal to raise chickens, but not roosters, and various online resources online devoted to urban chicken farming have sprouted up in recent years, including urbanchickens.org and urbanchickens.net.

And veterinarians that specialize in exotic animals have helped the Holbrookes along the way.

Chickens lay four to five eggs each week for two years, and then fewer eggs as they get older. Sarah said the family will make a decision about what to do next when that time comes. It will be tough, she admitted — the family has grown attached to the hens.

“They’re adorable, and we like them a lot,” Sarah said. “We’re kind of fond of them.” 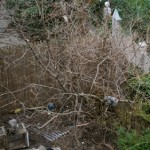 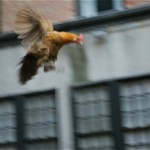 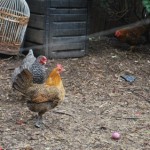 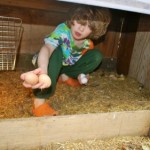 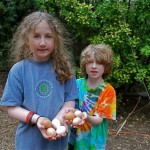 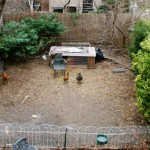 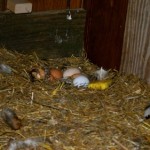 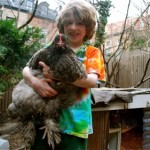 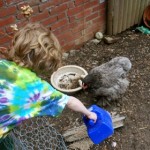 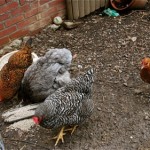 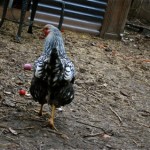 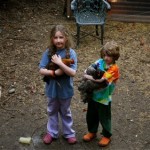 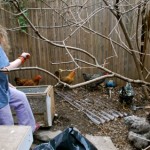