Seen on Montague Street yesterday: hanging from the railing of a front stoop, encased in a Ziplock bag, was a printed piece of paper, with the headline

Thinking I had discovered an 18th century broadside proclaiming that the King is in need of men of questionable morals and character to embark upon a voyage to put down rebellion in far-off colonies, I read on, but was disappointed:

“IF YOU ARE THE PERSON(S) WHO STOLE TWO CHILDREN’S RAZOR SCOOTERS FROM THIS LOCATION ON SUNDAY AFTERNOON AT 1:30PM BE COMFORTED THAT YOU HAVE BROKEN THE HEARTS OF MY FIVE-YEAR OLD DAUGHTER AND THREE-YEAR OLD SON.

ENJOY THEM WHILE YOU HAVE THEM AS THEY ARE UNIQUE AND IF I FIND THEM I WILL PROSECUTE TO THE FULLEST EXTENT OF THE LAW.”

Poor kids…on top of everything else, they’re going to be raised to eliminate commas and the second hyphen from “five-year-old.”

Is there a crime wave in the Heights?  "KT" writes: 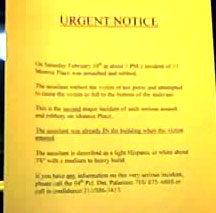 Hi there,
I was hoping you might do a story on Monroe Place (between Clark and Pierrepont)– I live there and this morning there was a sign in my foyer saying that a woman had been attacked there this past week.  It also said this was the second recorded attack on Monroe Place recently.  Very upsetting!  Am I unknowingly living on a "bad" block?
Please help!