With initial signs pointing to the successful rezoning of P.S. 8 and P.S. 307, the CEC and DOE are turning their focus toward two pressing issues: standardized testing and the development of quality middle schools with equal access for all District 13 students.

April means one thing for 3rd through 8th grade students attending NYC public schools.  Testing.  Tonight, March 28th the CEC13 is sponsoring a community forum to discuss “changes to the test this year, how the tests are used, why they’re controversial, and why some parent are considering opting their child out of the tests.” The meeting takes place at P.S. 133, 610 Baltic Street from 6:30 – 8:00 pm. 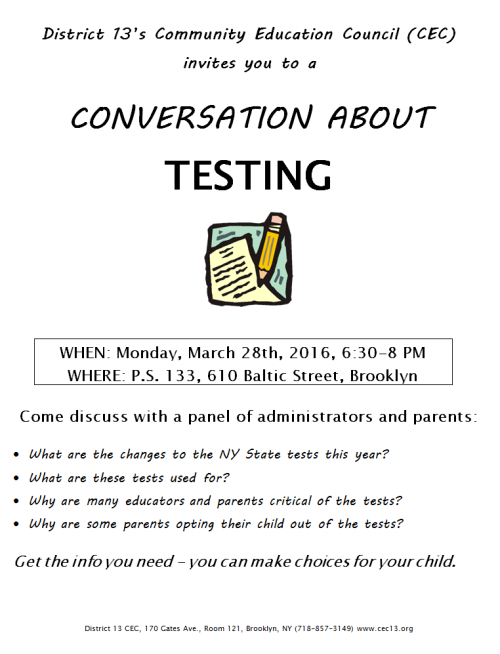 A February Politico article outlined the changes to take place this year including fewer questions and additional time for students who need it.  In December, The New York Times reported the NY Board of Regents had voted to exclude test results from teacher evaluations at least through the 2018-19 school year.  The opt-out movement is strong and gaining momentum not just in NY, where 1 in 5 students opted out of last year’s tests, but nationally as well.

DNAinfo reported  Chancellor Carmen Farina discussed testing with District 15 parents who support the opt-out movement at an invitation-only meeting last week. Farina remarked, “I think there is a place and a time to opt out” citing that children with special needs receiving services via an IEP and new English Language Learner students should not have to take them.

A recent Washington Post Op-Ed piece discusses the possible “sea change” set to take place in NY with the appointment of new NY Board of Regents Chancellor, Betty Rosa who takes her post on April 1st.  Rosa replaces

With the re-siting of Satellite West Middle School and opening of the Dock Street school in September, the question of equitable middle school admissions is on the minds of Administrators, Educators and parents alike.  At a Dock Street open house held in February at P.S. 307, ChalkBeat reported the new school would have a screening process.

A series of Middle School Equity Mini-Labs have been scheduled throughout District 13.  The workshops are sponsored by NYC Public, a “project of the Fund for the City of New York that is dedicated to empowering New York City’s public school parents.”

The next session takes place tomorrow, Tuesday March 29th, 5:30 – 8:30 pm at PS 287, 50 Navy Street.  Childcare will be provided with pre-registration.  CLICK HERE to sign up for this or other scheduled events to join the discussion. 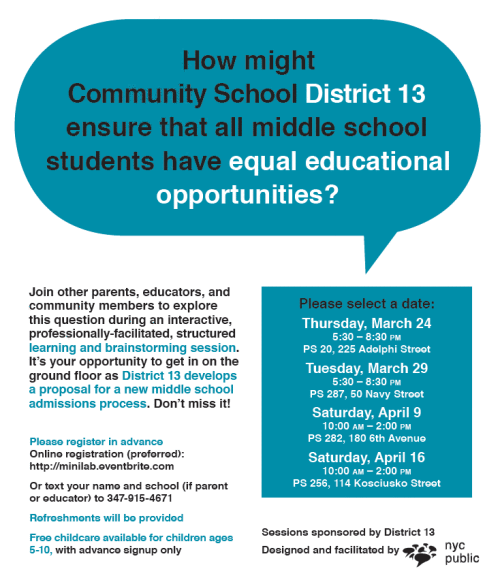 The need for this discussion is clear.  A shocking statistic was revealed at a CEC meeting earlier this month (and re-iterated at the PS8 PTA meeting last week):  Outside of Arts & Letters and M.S. 8, only 45 white students attend District 13’s middle schools.  45.  Per NYC Public’s website, “Those who attend will tackle the question [of equal educational opportunities] in a variety of ways: listening, talking, writing (briefly), maybe even drawing. Professional facilitation will keep things moving so that “everyone participates, but no one dominates.”