Kittens rescued by our own Brooklyn Bridge Animal Welfare Coalition will be appearing during Sunday’s Puppy Bowl XII’s Kitty Half-Time Show on Animal Planet on February 7.

This isn’t the first time that our local rescue felines have been featured by the network; in 2013, a mama cat and kittens rescued from Hurricane Sandy by BBAWC were featured on an episode of the series Too Cute.

Part of the Mayor’s Alliance for Animals, BBAWC got an e-mail from the city organization, asking if any of its members might be interested in participating and pounced at the chance to be a part of it.

After getting a health check by the network’s veterinarians, all the BBAWC kittens were cleared to play.

“Some of them,” said BBAWC’s Anne Levin, “were more interested in an acting career than others. Some of the ones I thought would be the most outgoing were really outraged at the idea of being put on display.” 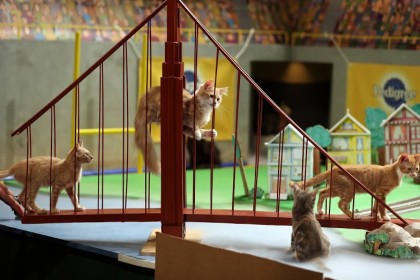 If the approximately 17 1/2 hours of Super Bowl pre-game is a little too much for you, you can tune into Animal Planet from 3-5 pm. This year’s Big Game will be held in the Bay Area, and the Kitty Half-Time Show will make the most of its West Coast locale, featuring

a cat-astrophic San Francisco inspired kitten takeover to the Bay Area. These ferocious felines are on a spree of cat-aclismic destruction as they paw across historic landmarks including the Golden Gate Bridge, Fisherman’s Wharf and infamous “Al-Cat-Raz.”

Like the half-time show, Puppy Bowl will feature animals from rescue organizations.

Since being filmed in October, all the kittens featured have been adopted, but BBAWC has plenty of older cats and kittens looking for their forever homes, and with kitten season right around the corner, now is a perfect time to help those older felines find the homes they need.

The Puppy Bowl will air on Animal Planet on Sunday, Feb. 7 at 3 pm. The two-hour program will repeat at 5 pm and 7 pm.
All photos courtesy of Animal Planet.