Too Cute Comes To Brooklyn Heights 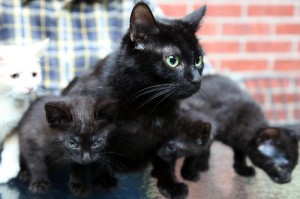 When Brooklyn Bridge Animal Welfare Coalition took in a pregnant cat who appeared  after Hurricane Sandy, the organization had no idea that she would become a TV star.

Juno gave birth to three of her own kittens, and then the magnanimous mom also adopted an orphan kitten, nursing her along with her own babies, who are now all of adoptable age and who will be featured at this Sunday’s Maddie’s Pet Adoption Days free adoption event in Union Square.

Also attending the event will be an Animal Planet television crew, filming the final episode of a Too Cute series that will feature Juno and her babies, focusing on the day that they get adopted and get to go to their forever home.

“She was just an amazing mother to her own kittens,” BBAWC’s Anne Levin said of Juno. “She’s incredibly sweet and good-natured.”

“In February we got a call from Animal Care and Control—not everyone will take orphan bottle babies, and these were particularly sad cases, and Juno was just so sweet and affectionate towards them.”

Juno has been fostered in Brooklyn Heights since she was taken in last fall, and she and the four kittens—three of her own and one she “adopted”–have been filmed every couple of weeks since they were born.

Levin doesn’t know exactly when the Juno episodes will air. Animal Planet airs in Brooklyn Heights on TWC channels 86 and 786 and FiOS 130/1565.

Click here for more photos of Juno and her babies here, and here to see other cats and kittens available for adoption from BBAWC.