Last chance for Murder on the Nile at Heights Players

The current Heights Players production of Agatha Christie’s Murder on the Nile is a murder mystery that takes place aboard a cruise ship in Egypt. The play, adapted from Christie’s novel Death on the Nile, debuted on Broadway in 1946. This is the second time the Heights Players have done a production of the play, and both times they’ve been directed by the group’s sole remaining original member, John Bourne. We had the chance to speak to Bourne, a Cobble Hill resident, after a Sunday matinee.

The Heights Players is in its 53rd year, and John Bourne has been there since day one. Starting off as a house manager, he quickly progressed to an actor and eventually a director, directing at least one play for the group every year since 1964. After all those years, plays are bound to repeat, but Murder on the Nile is one production that Bourne always wanted to re-do. 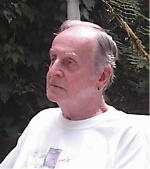 “I was never satisfied the first time I did it,” says Bourne. When he directed the play in 1994, he based casting “more on friendship than thinking of the show itself.” This time around, he was more open in casting, and chose people who looked the part and gave good auditions, regardless of their reputations or history with the Heights Players.

While the current production of Murder on the Nile features new names in the playbill, there are many familiar faces placing their stamp on the show. John Downing, a regular amongst the Players, plays a convincing, pious Canon Pennefather, while Timothy Mullins, a Hollywood native who’s been in two Players productions, delivers his lines as Simon Mostyn with vocal intonations that seem to have been learned directly from Gregory Peck.

As director, Bourne feels that he’s redeemed himself for his previous production of the play. As an active member of the neighborhood who walks the ten blocks from his house to the theater, he urges nearby residents to attend Heights Players shows. “We’ve had 53 seasons, so we must be doing something right. I would really like to see more neighborhood support of the theater. Sometimes I feel like we have more people who come from Westchester and Long Island than we do from Brooklyn Heights.”

Save Madison the Dog from the Pound
Giamatti on GMA