Save Madison the Dog from the Pound 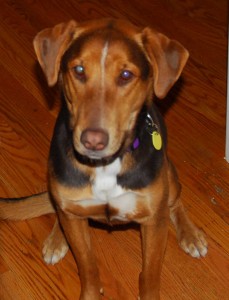 When I was about three years old, I ran crying to my mother. “Pat bit me,” I sobbed.

“You deserved it,” she answered.

That is as fair a portrait of a Family Dog as I can give you. My mother knew her dog, a black Lab bitch that was the envy of my father’s hunting friends and the dame of two large litters that would include two Montana Field Trial Champions. If my mother’s protégé bit me, I had teased her or annoyed her and ignored her growls until she was pushed to the edge. It was the kind of thing I would do and my mother knew Pat’s patience extended pretty far. In that sense, Pat and I were equal members in the balance of my family’s life.

There have been notices up in the local pet stores and on Craigslist for the last few weeks regarding Madison, a hound-Lab mix adopted at eight weeks from a City shelter, who may be a family’s dog but is not a Family Dog. She’s now 60 pounds and over four years old. Her owners have had two kids in that time and have decided she doesn’t fit their new lifestyle. Despite Madison’s affection for the youngsters, they want to find the dog another home. Their patience is running out. If the dog isn’t adopted by Saturday, March 21st, they intend to take her back to the A.S.P.C.A. shelter they got her from.

It’s lucky they got her from the A.S.P.C.A., a no-kill organization, because it has a policy of taking back any dogs adopted from its shelters. Otherwise, they evaluate dogs that are given up for adoption for physical and behavioral problems. Dogs over 40 pounds go on a wait list for acceptance because they have so little room for them, and so few people want them.

There lies the rub. The tragedy for a dog like Madison is that she thrives on exercise, attention, companionship and reinforced training. How, if she doesn’t luck out and get adopted quickly, does she get that in a cage? Her unmanageability and excitability, not unusual qualities for a dog that doesn’t have consistent training, will get worse in a shelter. A dog that needs love and a certain amount of freedom will die from the same medical condition that kids die from when they’re habitually ignored: failure to thrive. The A.S.P.C.A. can guarantee she will be fed, medically treated and even given as much affection as a busy shelter can provide, but it’s not a home, it’s a benign prison.

Last week, a respondent to my post wrote of “what a great neighborhood we live in”. Maybe we can put our kibble where our snarkiness is for once. Maybe someone reading this wants a Family Dog rather than a dog hanging out around a family.

I’ll put you in touch with Madison if you respond to this post, whether she’s in Brooklyn Heights or in the shelter she came from. She comes with three months of free walks and a bag of Iams, out of gratitude from a couple of her fans.

(Send inquiries to webmaster AT brooklynheightsblog.com)