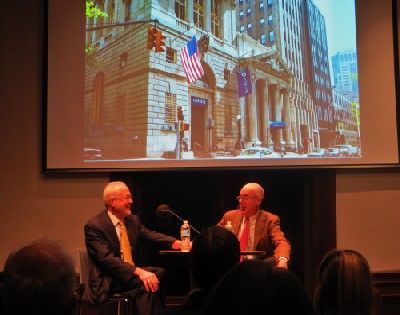 The evening’s program (read more about the proceedings in the Eagle) featured a lively discussion between NYPAP founder and ardent preservationist Anthony Wood, author of Preserving New York: Winning the Right to Protect a City’s Landmarks (left in photo above) and architectural historian Francis Morrone, during which it was mentioned that application has been made for landmark status for two significant buildings on the north side of Montague Street between Clinton and Court streets. This block is outside the Brooklyn Heights Historic District, but within Brooklyn Heights. In the photo at the top of this post, taken from the corner of Clinton and Montague, these are the second and third buildings in. The building on the corner, the former Brooklyn Trust Company Building (now a Chase Bank branch with apartments upstairs) is already landmarked. 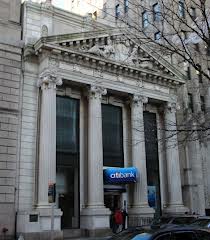 The first of the landmark candidates (the second building in, with the classical portico; see photo above) is the former People’s Trust Building (Mowbray & Uffinger, 1903), at 183 Montague, which is now a Citibank branch. In his An Architectural Guidebook to Brooklyn, Morrone praises its

fine tetrastyle Corinthian portico, the fully modeled, fluted columns set on high bases. The columns rise to a richly decorated entablature below a dentilated cornice. At the top is a full-width, triangular pediment filled with figure sculpture and topped with acroteria.

(Yes, this passage had me inquiring of Google twice.) Morrone also mentions the building’s rear addition, which houses the bank’s tellers, with offices above, facing Pierrepont Street. It was designed by Shreve, Lamb and Harmon and completed, he notes, “in the year that they began work on the Empire State Building.” In contrast to the classical Montague side, it’s a fine example, both exterior and interior, of the Art Deco style.

Just over a year ago we noted that the developer Jonathan Rose Companies had acquired the rights to purchase 181 Montague and its Pierrepont Street extension. The deal was closed in March of this year. There are no firm indications so far of the developer’s plans for the site, but it will be interesting to see if it opposes the landmark application. 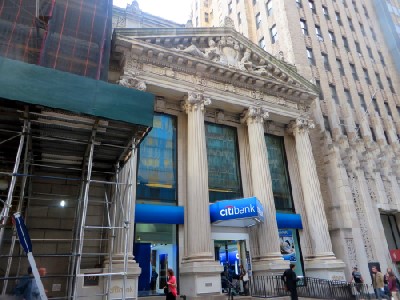 The other landmark candidate is the tall building just to the right of the Citibank building in the photo above. This is 185 Montague, originally the National Title Guaranty Building (Corbett, Harrison & MacMurray, 1930), now probably best known to Heights residents as the home of Chipotle. In his Architectural Guidebook Morrone observes:

This is one of the jazziest little Art Deco skyscrapers in town, its play of projecting piers and receding planes reminiscent of the punching horns of Count Basie’s orchestra. Floral and mechanical motifs are mixed in the exuberant traceried relief work. The firm of Corbett, Harrison & MacMurray began work on Rockefeller Center right after designing this building.

We know of no specific threat to this building. The one next door, 189 Montague, an undistinguished modern office building, is being taken down to be replaced by a residential building. Should 185 Montague be preserved, it seems likely to be converted to residential use, as is happening to many older office buildings.