The Real Deal reports that developer Jonathan Rose Companies has agreed to buy the building (photo) that houses Citibank’s Brooklyn Heights branch. According to the article, Rose acquired the rights to purchase the building from another real estate concern, Treeline Equities, which owns the office building at 189 Montague Street, two doors down from the Citibank building at 183 Montague.

The present owner of the Citibank building is Madison Capital, described in the Real Deal article as “retail oriented”. The building extends from Montague across the block to Pierrepont, where it has the address 140 Pierrepont Street (photo below). 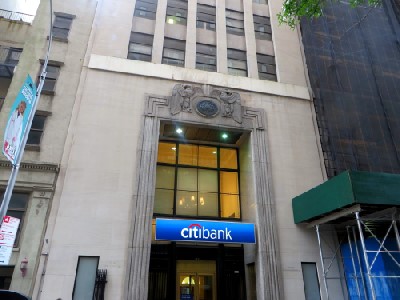 The Citibank building appears to be two separate buildings, although they make up one property. The half facing Montague Street (photo at the top) is a very ornate neoclassical structure, both in its facade and interior. The half facing Pierrepont, photo directly above, is in the art deco style prevalent in the 1920s and ’30s. While the Montague side is capped with a peaked roof, the Pierrepont side has three floors of offices above the banking space. The Real Deal article says Madison Capital’s intent was to “redevelop the Pierrepont side” but to leave the Montague side “intact.” (The buildings lie outside the Brooklyn Heights Historic District, and neither is landmarked.)

There is no indication of Rose’s intent should it complete its acquisition of the Citibank buildings, but–and this is speculation–what seems a likely possibility is that the office spaces above the Pierrepont Street would be re-developed as residential, just as is being done with the former office space at the landmarked 177 Montague right next door. It’s also possible Rose may wish to build some extra stories above the Pierrepont side.

The Real Deal article notes that Treeline is not renewing office leases at 189 Montague, and may intend to convert it to residential.