As previously reported, the re-zoning vote has been pushed back for two months so the CEC and DOE can hear more feedback from the P.S. 8 and P.S. 307 communities.

Tonight’s CEC meeting is an opportunity to weigh-in on the re-zoning and also participate in the conversation about the DOE’s plan to re-locate M.S. 313 to the new Dock Street school.  For some background, check out this blog by CEC Member Rob Underwood, where he shares his personal opinion on why middle schools matter to District 13 right now. 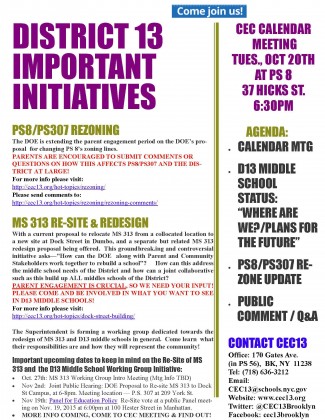