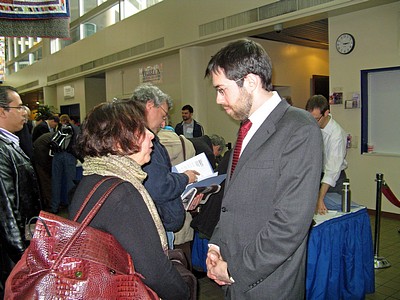 Yesterday afternoon, State Senator Daniel Squadron, shown above conversing with a constituent before the event, hosted his first Community Convention at Borough of Manhattan Community College. Attendees packed the BMCC auditorium for the opening plenary event. Several other elected officials were present, including Congressman Jerrold Nadler, Manhattan Borough President Scott Stringer, and Councilmember David Yassky. In brief remarks, all praised Squadron for his energy and grasp of issues. In his opening remarks, Squadron said he planned this, the first of what he intends to be an annual event, because of his strong belief that active citizen participation is essential to the success of representative democracy.

The reason such participation is needed, Squadron said, is that each person, including the elected representative, has limited knowledge and understanding. No one sees the whole horizon, though each may see a different sector. For government to function effectively, representatives must actively seek the views of their constituents in order to identify issues that government should address, and concerns that affect how those issues are resolved. Citizens should participate in government, Squadron said, voluntarily and “not from fear of force.”

Following the plenary session, attendees were asked to separate into groups to discuss issues of interest. The discussion groups were:

Your correspondent chose to attend the Zoning, Neighborhood Preservation & Community Development discussion. A number of neighborhoods and groups were represented there, including Carroll Gardens, the Columbia Street District, the Union-Sackett Block Association, the Lower East Side BID, the East Village Community Coalition, the Brooklyn Preservation Council, the Atlantic Avenue Betterment Association, the Hoyt Street Alliance, and the Central Brooklyn Housing Council. The discussion was lively, and focused on issues of neighborhood influence over planning and zoning decisions, as well as the need to take into account in these decisions matters such as effects on traffic and displacement of long time residents by gentrification.

At the end of the discussion, participants were asked to fill out “constituent input” forms, answering the following questions:

What are your priorities for changes you would like to see in our neighborhood?

What pieces of legislation do you think are particularly important to move this year?

Do you have any new ideas that you think our government should consider implementing?

One of my priorities is to make our government more open and accessible to New Yorkers. I have my own proposals for how to do that but I appreciate hearing more. Do you have any ideas about how our government should function that you would like to share?