After receiving feedback from the community, the DOE’s Office of District Planning is scheduled to present their final re-zoning proposal at the next CEC13 Calendar Meeting this Wednesday September 30th, 6:30 – 9:00 pm at P.S. 307, 209 York Street in Brooklyn.  There will be opportunity for public comment at the meeting.  Per the CEC website, “the CEC must vote on the plan, at a public meeting, within 45 days of the date the plan is submitted by the District Superintendent.”  During this time the community may continue to submit their feedback, comments, questions and concerns via the CEC webform.  If there is no CEC regular Calendar meeting that meets this timeline, a Special Meeting will be called and announced to the public with at least 48 hours’ notice.

The CEC website also explains, “Should the rezoning plan submitted by the District Superintendent merit significant changes based on feedback received, that proposal would require a new formal presentation by ODP followed by and a new submission from the Superintendent requesting approval.  A new 45-day “clock” for CEC approval would begin on the date the Superintendent submits the proposal for approval.” 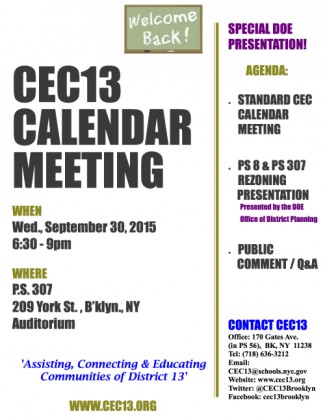 The draft re-zoning proposal, was first presented to the community at a series of Town Hall meetings held on September 16th at P.S. 307 and again on September 21st at P.S. 8. (A “slightly updated version”  of the draft was made available by the CEC this morning and contains a new slide (#11) with 2015-2016 enrollment data.)

The public discourse on the re-zoning, which redraws the zone lines at Brooklyn Bridge and sections Dumbo and Vinegar Hill to P.S. 307, has caught the attention of the national and local news including The New York Times, The Week, Wall Street Journal, Inside Schools, Gothamist and DNAinfo, among others.

Full details of the re-zoning timeline, FAQ’s and a schedule of CEC meetings are available on the CEC website.  To receive regular updates from the CEC, enter your email address in the left side-bar of the CEC website.

CORRECTION: This post has been edited to reflect clarification of the re-zoning approval timeline.