Stroll the Brooklyn Heights Promenade and you can hear it day and night: the constant thwapping of tourist helicopters.  Flights take off from the Downtown Manhattan Heliport (DMH) located just south of the Seaport and is operated by Saker Aviation Services.  According to the Stop the Chop NY NJ,  “these tours are allowed to operate 7 days a week, 365 days a year.  They fly for 10 hours a day six days a week (Mon – Sat 9:00 am to 7:00 pm) and 8 hours a day on Sundays (9:00 am – 5:00 pm).”

“It’s an issue that goes as far back as the 70’s,” explains Judy Stanton, Executive Director of the Brooklyn Heights Association.  But, she points out that the noise has escalated since 2010 when tourist helicopters were banned from using helipads in the East 30’s and West 30’s. “Everything was concentrated at the DMH…I think it was 28,000 flights a year were added to the DMH. And, the DMH then added a barge to create more helipad space.”

Relief may be on the way in the form of a bill introduced this past Thursday sponsored by City Councilmembers Carlos Menchaca (Red Hook), Margaret Chin (Lower Manhattan, Governor’s Island) and Helen Rosenthal (Upper West Side). The bill seeks to ban sightseeing helicopters that do not comply a specific range of noise levels as determined by the Federal Airport Noise and Capacity Act of 1990.  It does not include helicopters utilized by the military, media, emergency services (fire, police, coast guard, etc) private or chartered helicopters.

John Dellaportas, Vice President of Stop the Chop had this to say, “[The ban] will substantially curtail the tourist helicopters.  We think it’s a great start.  Frankly we don’t think it goes far enough.  Our organization supports an outright ban of all tourist helicopters over the skies of New York, NY Harbour and all the surrounding waterways.  But, it’s a step in the right direction.” 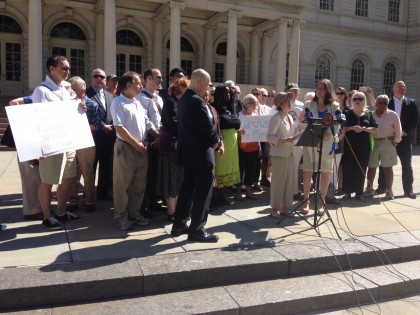 Supporters from Stop the Chop NY NJ flank Councilmembers Margaret Chin and Helen Rosenthal on the Steps of City Hall.

At a press conference held on the steps of City Hall, elected officials representing Manhattan, Brooklyn, Queens and Staten Island along with grass roots activists and fed-up residents from the Upper West Side to Downtown Brooklyn alike decried the scourge of noise and environmental pollution they attribute to helicopter tourism.  Councilmember Helen Rosenthal began, “We are here to stop the noise that is completely ruining the lives of so many New Yorkers…We look forward to working with the de Blasio administration to pass this legislation.”  Councilmember Chin pleaded, “stop these helicopters that are disrupting the quality of life!”  Chin added, “we welcome tourists to NYC…if they want a beautiful view they can go up to the [observation deck of] World Trade Center,” drawing chants of “Stop the Chop!” from rally attendees.

State Senator Liz Kreuger shared Councilmember Chin’s sentiment, “We can show you other ways to look at NYC.  [It is a] ridiculous argument that tourists will decline [because of this legislation].” Assemblymember Jo Anne Simon was “delighted to support the ban” saying the situation has reached a “crisis point” with Brooklyn Bridge Park in the “direct line” of the helicopters.  She adding her constituents suffer from “disrupted sleep, fumes” and children cannot study or practice music.  Councilman Levin said, “This is something that is long overdue.  I hear from constituents every day in spring, summer and autumn…we’ve spent hundreds of millions of dollars on Brooklyn Bridge Park.  You can’t enjoy the scenery [or] relaxation…because of the intense noise from this virtually unregulated industry.” 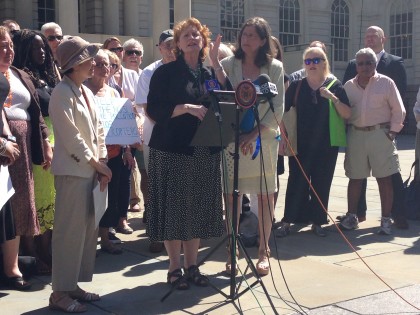 Murray Fisher, Founder of the New York Harbor School on Governor’s Island where being outside and near the water is a central element to the curriculum, said the helicopter flights “makes teaching and learning virtually impossible in an outdoor environment.” Paul Reickhoff, Founder and CEO of the Iraq and Afghanistan Veterans of America and a veteran himself exclaimed, “I hear more helicopters over my house than I ever did in Baghdad.  It’s a quality of life issue..it’s a security issue…[and] it doesn’t help our veterans [who are] battling PTSD. Stop this menace!” A representative from Congressman Jerrold Nadler’s office lamented, “We are only lucky that we have not had more accidents.”

Joining the chorus of electeds and citizens supporting the ban is long-time Brooklyn Heights resident and self proclaimed “noise veteran,” Roberto Gautier.  He lives at the foot of the Brooklyn Bridge and has endured the ongoing construction and BQE traffic.  “The kind of fuel [helicopters use] is the dirtiest fuel that you can get.  So not only do you have noise but you have air pollution…there are hundreds of flights and they are all giving [off] emissions.”

Chapin Fay Esq, VP of Mercury, a PR agency that bills itself as “a high-stakes public strategy firm,” who represents Helicopters Matter, told the Brooklyn Heights blog that 300 full time jobs would be lost at the heliport and that this legislation is “banning not just helicopters but banning the industry.”  The organization’s flyer claims helicopters provide over thirty million dollars in revenue which the city uses to “fund schools, hospitals, firefighters and other fundamental government services.”

But supporters of the bill say the revenue generated is exaggerated.  Judy Stanton shared, “The numbers that are quoted, that the Bloomberg Administration [used], I’m seeing with the current Administration. They are just believing everything that EDC (Economic Development Corporation) claims is the benefit from helicopter tours.”  Stanton explained the formula employed by the city incorporates hotel stays, meals and theater tickets, “all of that gets glommed together,” along with the cost of a helicopter flight (Chapin Fay quoted approximately $150 per flight) and is then multiplied by the number of flights per day and 365 days per year.  This is then added to “the small amount that the company that leases the heliport contributes or pays for their lease.  And then they say it’s so many millions of dollars a year for New York City.  But it’s a false number.  The actual lease amount, is something like 4 million annually for a lease.  That’s nothing.”

Helicopters Matters, who call the bill “disgraceful” maintains that less than 1% of noise complaints to 311 are due to helicopters.  Chapin Fay said that some concessions could be made including ensuring flights are not over land, cutting hours of operation and enlarging helicopter tail numbers for easier identification.  Chapin said, “We’d be willing to look at that again.”