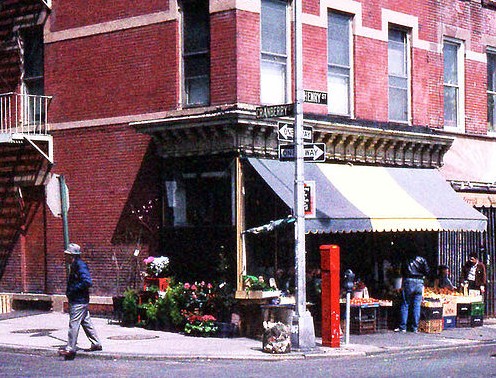 On November 21, 1982, the New York Times published If You’re Thinking of Living in Brooklyn Heights outling the benefits of living here in the nabe.

We found a few passages to be of interest, especially this one which had us regretting selling our time machine:

Crime in the nabe has decreased significantly since the Reagan era, with the 84th Precinct reporting 209 robberies and 148 burglaries in 2006. In 1982, these stats were considered “improved”:

Crime has been a problem in the Heights, but the overall rate has slowed in the last year, according to Patricia McDermott, the community affairs officer of the 84th Police Precinct, which covers the area. She said robberies, at 974 in the first 10 months of this year, were down 12.3 percent from the same period of 1981, and burglaries, at 980, were down 30 percent. the 559 car thefts in the first 10 months represented a 14.3 percent gain over the same period in 1981.

Why crime goes down is hard to pinpoint, Officer McDermott says, but contributing factors in the Heights are “more police visibility and a greater willingness on the part of residents to call police when they see something happen.”

No trip back in time would be complete without a mention of shopping on Montague Street:

The main Heights shopping thorough-fare is Montague Street, which has everything form boutiques and bookstores to major supermarkets and restaurants of every kind. In a one-block stretch of Montague Street, between Henry and Clinton Streets, there are more than a dozen eating places, including Armando’s, which specializes in Italian food, at 143; Chuan Yuan, a Sichuan place at 128; Hebrew National at 139; Old Hungary at 142; Foffe, which specializes in wild game, at 155, and even a Burger King, with a tastefully restrained front to comply with landmark regulations, at 135.

And, of course, development was an issue back then too:

Until early 1980, the Hotel Margaret, with its elegant copperwork facade, stood on what is now a weed-covered plot at Orange Street and Columbia Heights. The landmark hotel, built in 1889, was destroyed by fire just as work to turn it into co-op apartments was about to be completed.

The owner, Bruce Eichner, proposed to replace the Margaret with a 15-story structure, slightly shorter than the 128-foot hotel, but that, along with a 13-floor design, was rejected by the Landmarks Preservation Commission as too large and not in keeping with the neighborhood. An 11-floor design was approved on Oct. 26.

Mr. Eichner now faces another hurdle – obtaining a variance from a zoning law that limits the height of new buildings in the neighborhood to 50 feet. Mr. Eichner, who said he expected action on his request within four months, said he was entitled to build higher because the Margaret was higher. An officer of the Brooklyn Heights Association, which opposes the new plan, called that argument ”an irrelevancy.”

Construction of the “new” Hotel Margaret was completed by the Watchtower and now serves as dorms for its members. Eichner is still very active in development with his brother Stuart, recently with 180 Montague Street.

Have vintage photos of the nabe? Send them to BHB and we’ll publish them.