Are There Ospreys in Brooklyn Bridge Park’s Future?

On Saturday afternoon your correspondent joined a group of bird and park enthusiasts for a lecture and tour conducted by Bart Chezar, an engineer by training with an educational background in marine science, who has taken up several projects relating to that subject. One is re-establishing oysters in New York Harbor, and another is luring ospreys, large raptors, related to hawks and eagles, that prey on live fish which they catch by diving into water. 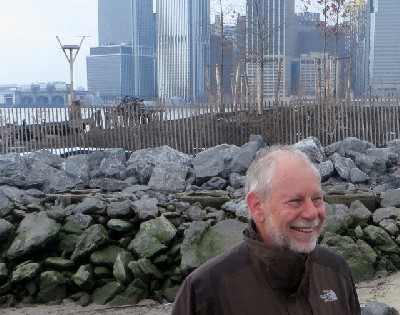 Mr. Chezar explained that ospreys typically build nests in the forks of dead trees in locations with good water views. He has built three structures, called osprey towers, that mimic forked tree trunks, with a platform inserted in the fork to provide a base for the nest. One was placed in a new park next to the Buttermilk Channel in Sunset Park, one on a pier at Governors Island, and one on part of the ruined Pier 4, below the foot of Montague Street in Brooklyn Bridge Park. That tower can be seen in the left background of the photo above. There’s a closer view of the tower in the photo below. 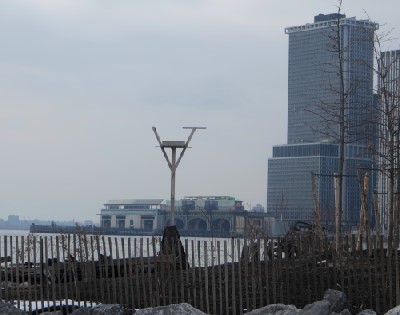 Ospreys that spend the spring and summer along the Middle Atlantic coast and in New England migrate to the Caribbean and the north coast of South America during the fall and winter. These birds have begun their return flights. Mr. Chezar hopes that a young male that has not yet established a nest site and mated–ospreys mate for life and return to the same nest each spring–will alight on the tower this year and build a nest.

You can learn more about ospreys and their migrations on this website. There’s even an app you can download to your iPhone or Android device that allows you to track the migrations of certain ospreys.