More on the Anchor at 76 Montague

On Saturday I received a phone call from Mr. Wolf Spille, owner of the soon-to-be-evicted anchor that has graced Montague Street since 1981, when Mr. Spille acquired the building at 76 Montague as offices for his ship brokerage business. Although he later sold the building, and now lives in North Carolina, he still owns the anchor, which until now the building’s owner, and each of its successive tenants, has been happy to leave in place. Now that a restaurant is moving in, its owner wants the space the anchor occupies for outdoor tables.

I asked Mr. Spille about the anchor’s history. Was it a real ship’s anchor that had seen service, or just a decorative sculpture? He told me it was genuine. When he bought the building, he wanted an anchor to display in front of it. He wanted one that was of about the same age as the building, mid 19th century, and went to a shipbreaker’s yard on Staten Island. There he found the anchor, mostly buried in mud. He knew it was a type used on sailing ships from about 1830 to 1860.

Mr. Spille had read our earlier post about the anchor; like me, he would very much like to see it remain in Brooklyn Heights, in a place easily visible to the public, as a reminder of our maritime heritage. He said he thought the Promenade, either the “roundel” at the Remsen Street entrance or the fenced space adjacent to the flagpole at the Montague Street entrance, would be ideal. I told him some people had expressed concerns about possible liability. He said children, including his own, had climbed on the anchor for 34 years without any injury. 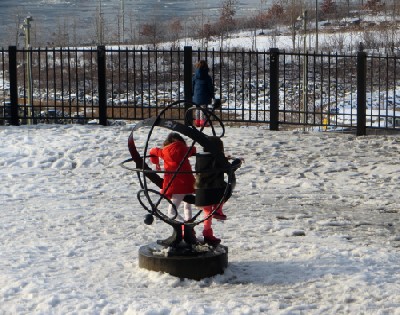 Yesterday, as I was walking from the Promenade to the Fruit Street Sitting Area, I noticed children playing on the armillary globe that the Parks Department is happy to have at the Promenade’s north end. Is there any good reason why the anchor shouldn’t “anchor” the Promenade’s south end?

Update: Mr. Spille called again today. He read this post, and saw something I hadn’t noticed: in the photo at the top of this post, taken this past Saturday, the anchor chain, which came with the anchor when it was purchased in 1981, is missing. Compare with the photo taken in January, which headed our earlier post: 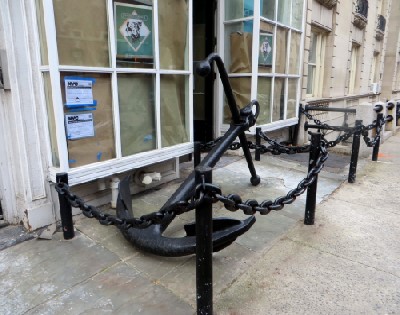 Mr. Spille said, “This indicates something is already afoot.”