Earlier this week, Henry Street’s Siggy’s Good Food closed its doors forever. As previously reported, the health food establishment – where “aliens ate free” – announced it would be shutting down at the end of February.

Brooklyn Paper: Sollitto is not completely shocked that her creative culinary enterprise has been forced out of Brooklyn Heights, though.

“That’s what always happens to the artists,” she said. “Look at Dumbo, they can’t afford to live there anymore.”

Sollitto launched a second Siggy’s in Manhattan in 2012, and it is still open. But she said city regulations are making it tough to run a business in that distant borough, citing the health department as a particularly pronounced source of headaches. 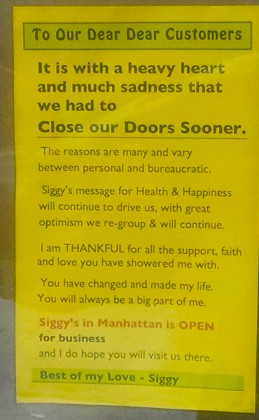