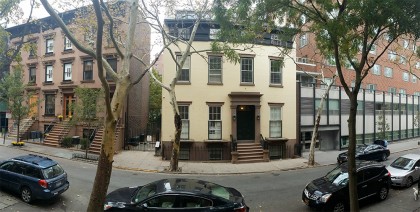 The changes include stripping the façade’s yellow paint to reveal the original brick, demolishing the existing rear porch and replacing it with a new two-story rear deck (which would give the residents better access between the driveway and the kitchen), replacing the existing driveway gate with a new, solid one, changing the windows, adding shutters, and adding a shed and pool, Curbed NY reported.