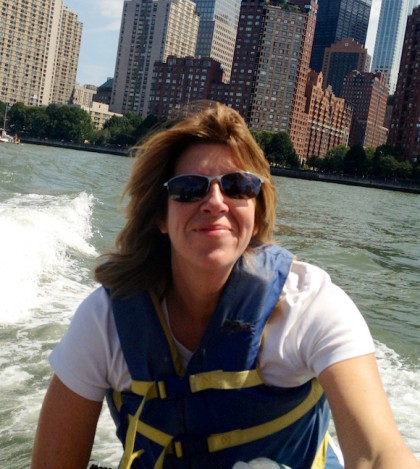 Last week Brooklyn Heights Blog spoke with Nancy Webster, executive director of the Brooklyn Bridge Park Conservancy since 2010, on the role of the conservancy in supporting BBP, her history with the park, and her views regarding the determined opposition to further housing development on BBP’s Pier 6. Ms. Webster, a resident of Carroll Gardens, first joined the conservancy as a volunteer in 1999.

The conservancy’s history stretches back to 1985 with the establishment of the Friends of Fulton Ferry Landing, a grass-roots organization that originally proposed that the vacant waterfront near the Brooklyn Bridge be turned into a park.

From those beginnings the conservancy has grown into a $2-million-dollar organization that—in addition to advocacy efforts on behalf of it’s partner organization, the Brooklyn Bridge Park Corporation—schedules hundreds of events annually in the 85-acre park.

Michael Randazzo, Brooklyn Heights Blog: How long have you personally been involved with the Brooklyn Bridge Park conservancy?

Nancy Webster, Brooklyn Bridge Park Conservancy: I’ve been on staff here at the conservancy since the fall of 2006. I started out doing communications and am now the executive director.

BHB: Were you part of the original team that founded the conservancy?

NW: No, I am not part of that original team. If you take a look at the history of the conservancy [and] the citizen’s movement to build Brooklyn Bridge Park, the conservancy really begins back in the mid-Eighties and emerges as a leader of the citizens’ organization to actually convert the piers [on the Brooklyn waterfront] into Brooklyn Bridge Park. So the conservancy and the movement to build the park actually have quite a long history with quite a few twists and turns. The good news is it’s a very successful story where we now have this amazing park with more great things to come.

BHB: What is your personal involvement with the history of this endeavor?.

NW: I was attracted to work at the conservancy because at that time I was a DUMBO resident, and I was excited about the possibility of a waterfront park and how that would be transformative, not only for my life, but [also] for the borough and the city.

I had previously been working in the advertising industry and did a career shift to come work here at the conservancy because I was so excited about the work that we were trying to do and the possibilities for Brooklyn Bridge Park.

BHB: So you were not involved with any discussions or any advocacy about BBP prior to taking a job with the conservancy in 2006?

NW: On a tangential level I had done some volunteer work for the conservancy prior to coming on staff and had been involved with the neighborhood association in DUMBO. This is in early 2000.

NW: That’s correct. It’s an entirely separate entity. The conservancy is a 501 c3.

The conservancy history really began as a leader of the citizens’ advocacy movement to build the park. That was successful. We expanded our mission to produce and facilitate free public events and activities that are in the park, coordinating the volunteer programs and raising project dollars to support that mission. We facilitate over 450 free events and activities in the park, including a very robust education program, lots of cultural and recreational events.

We coordinate over 7,000 volunteer hours in the park that help to maintain its green spaces and serve as a conduit for public outreach and communications to help people know what’s happening in the park and what they can come and see and enjoy. [The conservancy] functions in a supportive role to ensure that what we see as just an absolutely extraordinary public space lives up to its full potential in serving the citizens of New York and beyond.