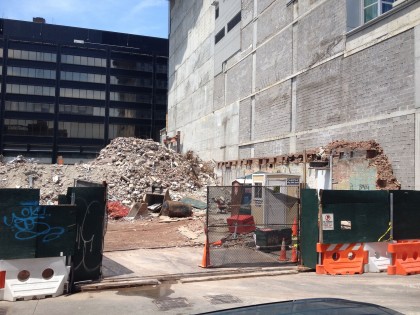 Fort Greene residents are holding their noses—literally—as a result of the latest Forest City Ratner incursion into their neighborhood. Residents at One Rockwell Place have complained to a host of public officials, including Public Advocate Tish James, Brooklyn Borough President Eric Adams, and New York City Council Member Laurie Combo, about 10 MetroTech Center, where a full-block demolition has filled the area adjacent to their five-story condominium with potentially harmful dust.

In taking on Forest City Ratner, known locally for the sprawling Atlantic Yards project slowly taking shape a short distance from this latest FCR project, Sandra Mullin and Laura Tucker are stirring up memories of epic battles over eminent domain that have dogged Brooklyn’s most ambitious development project in decades.

“Forest City Ratner never—not from day one—reached out and told us the scale of this demo project,” said Ms. Mullin by telephone on Wednesday. “Until we complained, they [FRC] weren’t even using [demolition] methods up to code”

Luckily for the long-term Fort Greene residents, at least one public official is listening. When reached for comment, Ms. Cumbo, whose district includes the disputed area, told BHB that: “My office has reached out to the resident representatives of One Rockwell Place and the Department of Environmental Protection to address the concerns regarding the ongoing construction by Forest City Ratner. We’re committed to working through the process to see a swift resolution.”

According to Mullin and Tucker, in dismantling the building—a former candy factory—to make way for an apartment complex, FCR created a situation that has gone from nuisance to potential health hazard.

Earlier this week FCR told BHB that that they complied with all necessary regulations. “During the entirety of the demolition of 10 MetroTech,” said Ashley Cotton, Senior Vice President of External Affairs for Forest City Ratner, “we employed dust control methods outlined in the New York City Department of Environmental Protection (DEP) regulations in order to control dust and we are within DEP and national regulations for dust generation. We are in full compliance with all regulations.”

“In terms of damage, noise and filth, my apartment is covered in a layer of fine grit,” said Tucker, whose apartment is directly across from the demolition site. “If I leave a window open, a paper towel used to wipe my kitchen table will come up black. Curtains washed in the late spring are grey with filth. It’s impossible to keep up with the cleaning. And we have absolutely no idea what’s in the dust.”

In listing her fellow residents’ concerns about the demolition—which began last November—Ms. Mullin said that as many as eleven children under the age of twelve are at risk, including a newborn whose parents are worried about exposure to airborne lead residue in the dust blanketing the demolished site.

Mullin stated that One Rockwell Place residents—where there are 24 units—are united in their concerns about long-term health issues as a result of the demolition.

“We’re not asking Forest City Ratner to do anything dramatic,” Ms. Mullins said about the dispute with a developer worth billions of dollars. “We’re just asking them to clean our apartments.”

PHOTO: 10 MetroTech Place from the entrance to One Rockwell Place