You may have noticed an odd looking small ship moored near the northeast corner of Brooklyn Bridge Park’s Pier 5 (see photo above) for the past couple of weeks. It’s the Baylander, billed as the “world’s smallest aircraft carrier.” Baylander is a former U.S. Navy vessel, built in the 1960s, that served as a troop and equipment lighter in the Delta region of Vietnam. After the war, she was decommissioned, but was put back into service, with the addition of a flight deck large enough to accommodate a single helicopter, in 1986. In that configuration, she served as a training ship for student helicopter pilots for over 25 years. 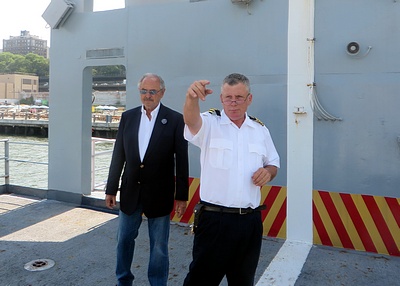 Baylander is now owned by the Trenk Family Foundation, established by Al and Abigail Trenk. Mr. Trenk is on the left in the photo above; standing next to him is Captain Scott Koen, skipper of the Baylander. Mr. Trenk said he and his wife were “excited” to have Baylander moved to Brooklyn Bridge Park.

Stationing the ship in the soon-to-be-opened Brooklyn Bridge Park Marina will afford thousands of New Yorkers the opportunity to visit, see and learn about a ship that was fully operational and designed to support helicopters from all military services and government agencies.” 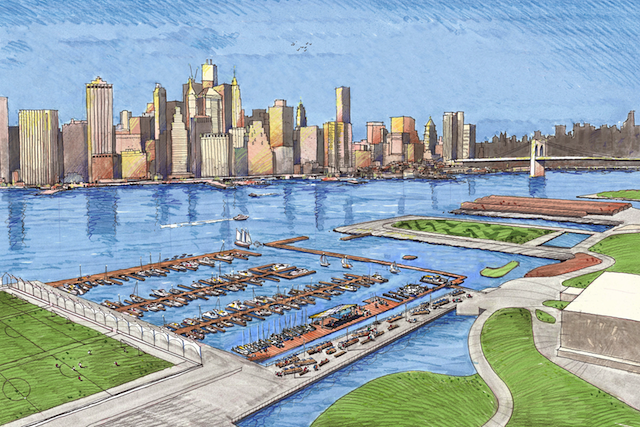 The Marina (see rendering above) will lie between Piers 4 and 5. Its piers, docks, and breakwaters are being assembled elsewhere, and will be towed to the site and assembled there, according to spokesperson Carter Craft.

Baylander will be open for free public tours starting this weekend, Saturday and Sunday, July 26 and 27, from 10:00 a.m. to 4:00 p.m., and on succeeding weekends through Labor Day.